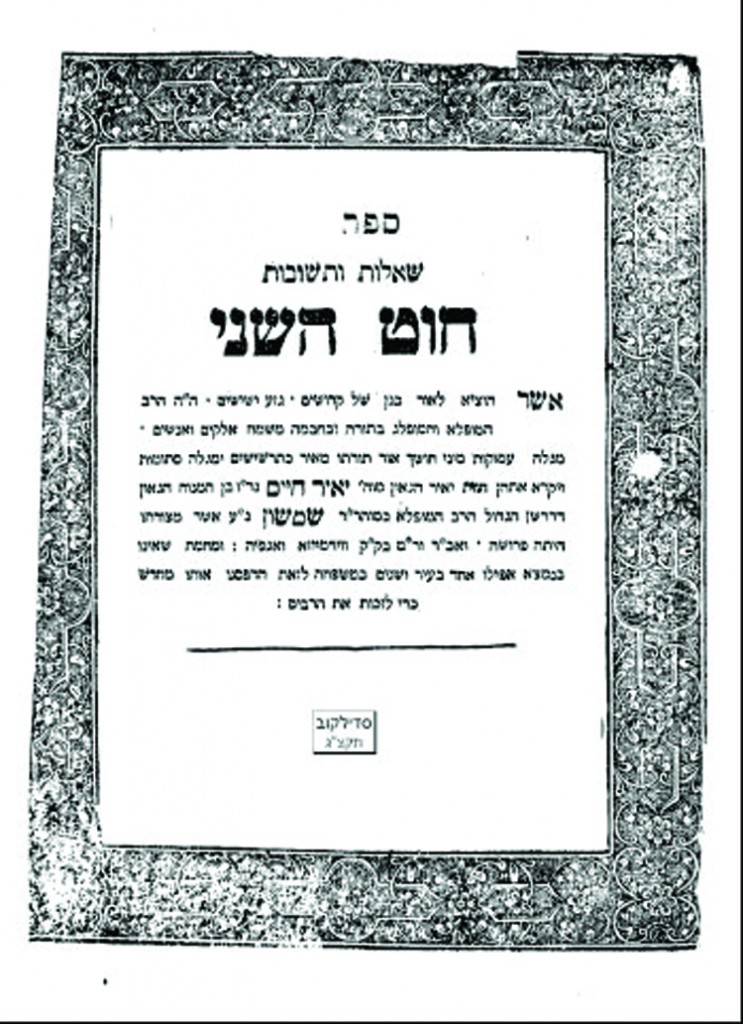 A Yom Tov is cited in Megillas Taanis commemorating the defeat of the Yevanim (Syrian-Greeks) by the Chashmona’im. The Yevanim desecrated Eretz Yisrael by hanging crowns of roses in many locations while singing songs to their avodah zarah. They also wrote their heretical messages on the horns of bulls and donkeys.

In 5705/1945, the Theresienstadt (Terezín, Czech Republic) concentration camp was liberated. Of the approximately 144,000 Jews who were sent to Theresienstadt, 25 percent died there, mostly because of the appalling conditions (hunger, disease, and a typhus epidemic at the very end of the war). About 88,000 were sent from there to Auschwitz and other extermination camps. When the war ended, a mere 19,000 had survived.

Harav Avraham Shmuel was one of the Gedolei Torah of his time. He was the son-in-law of Harav Yitzchak Hakohen of Prague (son-in-law of the Maharal of Pragueand mechaber of Paanei’ach Razah and Chassan Damim).

Reb Avraham Shmuel’s Rebbetzin, Chava, was a sister of the Geonim Harav Chaim Katz, Rav of Posen, and Harav Naftali Katz, the Semichas Chachamim. She was highly intelligent and a tzaddekes. Her grandson Harav Ya’ir named his sefer Chavos Ya’ir in her honor; in his hakdamah he details the nobility of his grandmother Chava, citing her greatness in Torah among other things.

Reb Avraham Shmuel served as Rav in Worms, where he suffered persecution by government authorities. In 5375/1615 the Jews of Worms were expelled and the shuls demolished. The Rav was almost killed during the expulsion, but his life and the life of his son were miraculously spared. These events caused the Rav great anguish, and a month later he was niftar at a very young age, perhaps 40. His Rebbetzin was only 30 at the time; out of respect for her husband, she never remarried.

Reb Avraham Shmuel left a son, Harav Moshe Shimon, mechaber of Shemen Hamaor, a darshan and maggid and the father of the Chavos Ya’ir.

In 1896, 255 people were killed when a tornado struck St. Louis, Missouri, and East St. Louis, Illinois.

In 1935, the Supreme Court struck down the National Industrial Recovery Act.

In 1936, the Cunard liner RMS Queen Mary left England on its maiden voyage to New York.

In 1941, the British Royal Navy sank the German battleship Bismarck off France, with a loss of some 2,000 lives, three days after the Bismarck sank the HMS Hood.

In 1942, Navy Cook 3rd Class Doris “Dorie” Miller became the first African-American to receive the Navy Cross for his “extraordinary courage and disregard for his own personal safety” during Japan’s attack on Pearl Harbor.

In 1962, a dump fire in Centralia, Pennsylvania, ignited a blaze in underground coal deposits that continues to burn to this day.