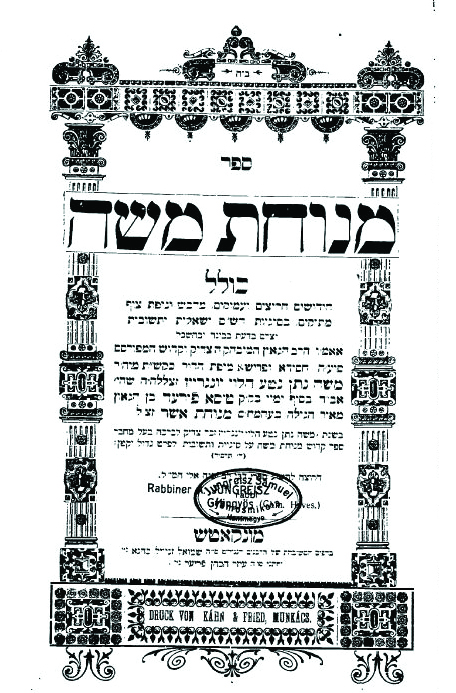 Third day of Creation: Hashem created the seas, the grass and the trees. This is the only day on which the Torah states twice “and Hashem saw that it was good.” Therefore, many tzaddikim referred to Tuesday as the “yom shehuchpal bo ki tov” — the day in which “it is good” is doubled.

In 5374/1614, the Jews of Frankfurt-am-Main were expelled; a taanis tzibbur was instituted to commemorate the expulsion.

Born in 5592/1832, Harav Moshe Nosson Nota Jungreis was the son of Harav Asher Anshel, Rav of Tchenger and author of Menuchas Asher. His mother was the daughter of Meir Almashder, Rav in Mattersdorf. His famous brothers were Rav Avraham, Rav in Tchenger, and Rav Shmuel Zev, Rav in Bahim.

He married the daughter of Harav Chaim Yosef Dov Kahana-Heller, Rav of Krasna.

Reb Moshe Nota, as he was called, was a talmid chacham, renowned for his mesirus nefesh for Torah. He learned standing up to keep himself awake, and fasted often.

Some of his sefarim are She’eilos U’teshuvos Menuchas Moshe and Toras Moshe Nosson on Torah.

In 1777, the Continental Congress — forced to flee in the face of advancing British forces — moved to York, Pennsylvania.

In 1846, Boston dentist William Morton used ether as an anesthetic for the first time as he extracted an ulcerated tooth from merchant Eben Frost.

In 1938, after co-signing the Munich Agreement allowing Nazi annexation of Czechoslovakia’s Sudetenland, British Prime Minister Neville Chamberlain said, “I believe it is peace for our time.”