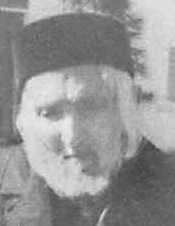 Harav Chaim Sinuani was born in Sinuan, Yemen, in 5658/1898. He was the son of Chacham Yichya, zt”l, of the eminent Bida family.

The young Chaim grew up in an atmosphere of purity and love of Torah. His mother prayed fervently that her son become a genuine talmid chacham. In fact, Chaim became one of Yemen’s greatest Chachamim. All his life Rav Chaim gave his mother credit for his achievements.

Rav Chaim’s first teacher was his father. Later, he went to the city of Jabal to study in the yeshivah of Harav Shlomo ben Yosef Tabib, zt”l, and Harav David Ya’ish Chadad, zt”l, two of Yemen’s greatest Torah luminaries.

When Rav Chaim was only 17, Rav Shlomo Tabib gave him semichah and authorized him to serve as a shochet, mohel and Dayan. However, Rav Chaim only desired to continue his Torah studies.

In 5679/1919, both Rav Shlomo Tabib and Rav David Ya’ish Chadad passed away, and the Jews of Sinuan and the vicinity felt that the young Rav Chaim Sinuani was best suited for the position.

At first, Rav Chaim refused, but eventually he gave in to the pressure to accept it.

As Rav of the Sinuan region, he attended to the needs of every member of his flock, even the simplest Jews.

In his wanderings, Rav Chaim reached a village called Tamami; he moved there long enough to found an educational framework. He taught children and adults alike.

In 5706/1946, Rav Sinuani decided to realize his life’s dream of settling in Eretz Hakodesh with his family. Ships to Eretz Yisrael set sail from the province of Aden, then under British control. While en route to Aden, they learned that the British had issued an order forbidding the entry of Jews.

Disguising themselves as Arabs, Rav Sinuani and his family managed to enter Aden, where they met other Jews who had also hoped to emigrate to Eretz Yisrael. Instead, they discovered that aliyah certificates were seldom granted to Jews.

Most of the stranded Jews were placed in a refugee camp in Chashad. There the Jews suffered terribly from the Yemenites, and from the Jewish Agency, who were against religion.

Rav Sinuani finally received a certificate, and he and his family were part of Operation Magic Carpet in 5709/1949.

In Eretz Yisrael, he devoted his time to founding talmudei Torah, establishing shiurim, building mikvaos and furthering other Torah institutions for the country’s Oriental Jews. He was also at the forefront of the battle to cancel the Sherut Le’umi law.

In 1907, President Theodore Roosevelt signed an executive order designed to prevent Japanese laborers from immigrating to the United States as part of a “gentlemen’s agreement” with Japan.