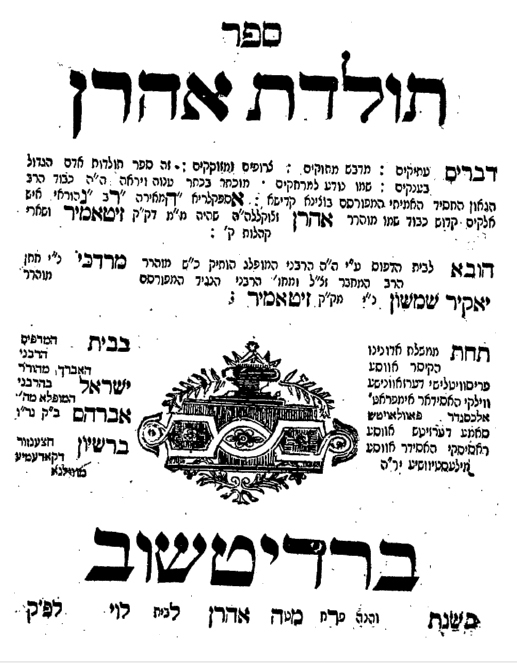 Harav Aharon of Zhitomir, son of Harav Mordechai, was recognized at a young age as a talmid chacham. He supported himself by working, rather than by a rabbinical position. He gave fiery drashos to be mechazek limud haTorah.

The Ohev Yisrael of Apta, zy”a; Harav Yisrael of Pikov, zy”a, son of Harav Levi Yitzchak of Berditchev; and Harav Mordechai of Chernobyl, zy”a, all wrote warm haskamos to Toldos Aharon, attesting to the great tzidkus and high madreigos of its mechaber. Reb Aharon was considered a k’dosh elyon.

He was the maggid in Zhitomir for three years, then moved to Hungary, where he was active in spreading Toras Hachassidus, especially in the cities of Krali and Ashver where he lived. His drashos brought people to teshuvah.

Harav Aharon was niftar on 26 Tishrei, a day after the yahrtzeit of his Rebbe, Harav Levi Yitzchak of Berditchev, and buried in Zhitomir.

When his talmidim saw that his end was near, they began to cry.

“Why are you crying?” Reb Aharon asked them. “The end of every person is death.”

“We will be left a flock without a shepherd,” they answered. The other tzaddikim of the generation are more hidden in their avodas Hashem, unlike our Rebbe, to whose derech in avodas Hashem we have become accustomed.”

“Know,” Reb Aharon said, “that before Moshiach comes, there will be greater tzaddikim and with what they do, they will be meyached more yichudim than we accomplished, even with our learning and davening!”

His close talmid Harav Levi of Zhitomir wrote down his divrei Torah after Shabbos and Yom Tov, which Reb Aharon edited. Toldos Aharon was printed shortly after his petirah in 5577, by his son-in-law Rav Mordechai and Rav Mordechai’s father, the nagid Reb Yakir Shimshom of Zhitomir. Other divrei Torah of Reb Aharon are printed in Pisgamin Kaddishin.

In 1829, the first modern hotel in America opened in Boston, Mass. The Tremont Hotel had 170 rooms that rented for $2 a day and included four meals.

In 1962, U.S. President Kennedy was informed that there were missile bases in Cuba, beginning the Cuban missile crisis.