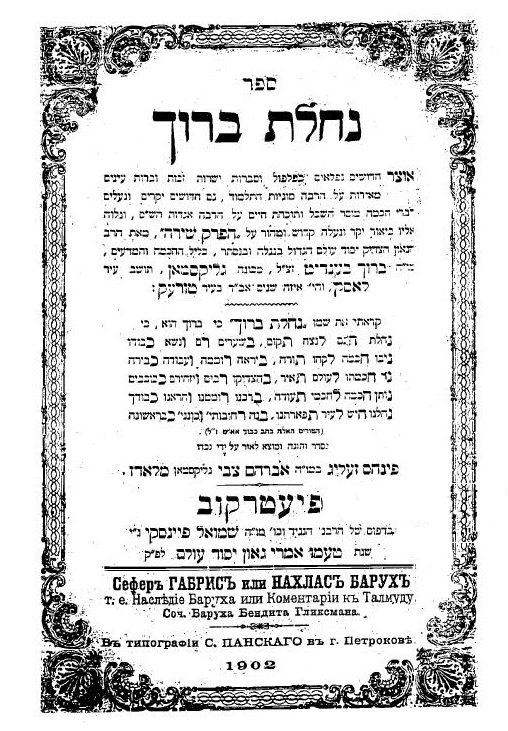 In 5129/1369, the Jews of Sicily were required to wear a special badge signifying that they were Jewish.

Harav Baruch Bendit Glucksman was born in Kwil in 5548/1788. He learned in the yeshivah of Harav Avraham Tiktin, zt”l, in Galoa.

After his marriage Rav Baruch Bendit founded his own yeshivah in Lask. He devoted himself to disseminating Torah while others ran his business. He was not willing to be a Rav, even though he was offered the position by the kehillah of Lask in 5586/1826.

But it seems that it was min haShamayim that Reb Baruch Bendit become a Rav.

After the huge fire in Lask in 5598/1838 that burned down all his factories, Rav Baruch Bendit took — temporarily — the position of Rav in Tureck. After two or three years, though, he left the Rabbanus and returned to Lask, where he continued to learn and teach, but not to serve as Rav.

Rav Baruch Bendit was a talmid chacham, fluent in all facets of the Torah, including Kabbalah. He was also a generous baal tzedakah.

Rav Baruch Bendit wrote many sefarim, many of which were burned in the Lask fire. The ones that were published include Nachalas Baruch on Shas; Shevet Hagadi; Brichei Zahav; a commentary on Pirkei Avos; and others.

In 1868, Japan’s Meiji Restoration re-established the authority of the emperor and heralded the fall of the military rulers known as shoguns; the upheaval paved the way for Japan’s drive toward becoming a modern power.

In 1938, the March of Dimes campaign to fight polio was established by President Franklin D. Roosevelt, who himself had been afflicted with the debilitating disease.

In 1958, the first six members of the newly-formed U.S. Commission on Civil Rights held their first meeting at the White House.