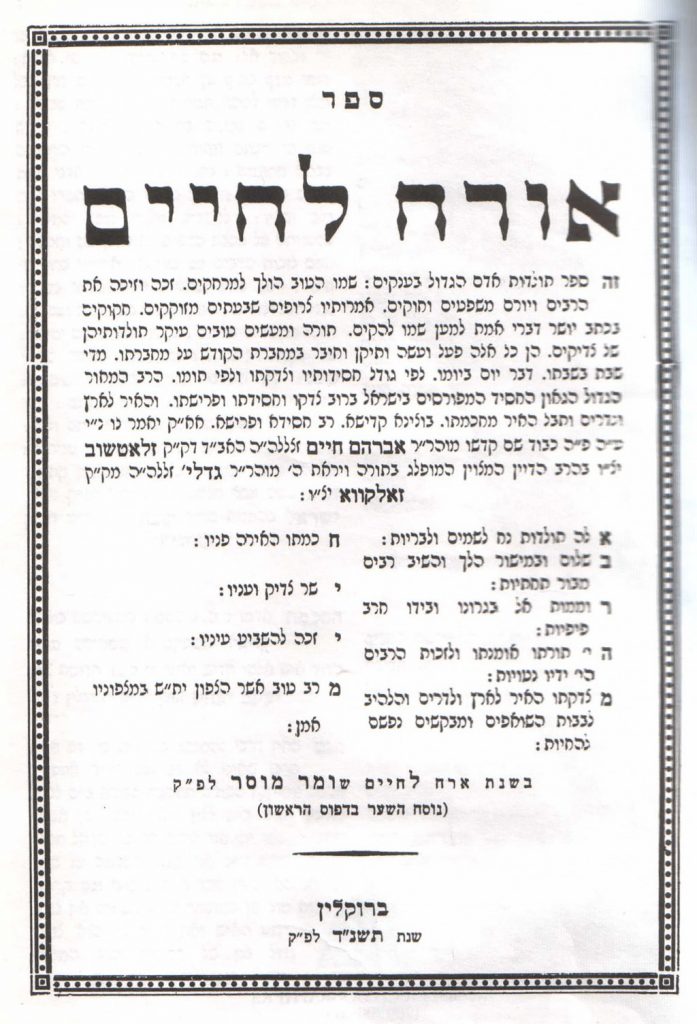 In 5129/1369, The Jews of Sicily were required to wear a special badge signifying that they were Jewish.

In 5532/1772, Harav Pinchas Horowitz, the Baal Haflaah, was appointed Rav of Frankfurt.

Harav Avraham Chaim was born c. 5510/1750 to Harav Gedaliah, who served as Rav of the town of Zolkova and was a son of Harav Binyamin Zev, a descendant of the Maharsha.

Reb Avraham Chaim was a devout talmid of the Rebbe Reb Dov Ber, the Maggid of Mezeritch; and after the Maggid’s petirah he learned from Harav Shmuel Shmelke Horowitz of Nikolsburg (an uncle of his first wife) and Harav Yechiel Mechel of Zlotchov.

He served as Rav in Zhbarov until 5553/1793, when his father-in-law Harav Yissachar Dov ascended to Eretz Yisrael and he replaced him as Rav in Zlotchov.

Rav Efraim Zalman Margulies writes about Reb Avraham Chaim in the introduction to the sefer Orach L’Chaim, “He was a great man in Torah and in Chassidus … and was fluent in the secrets of the Torah.”

He would spend most of the day davening and learning with extraordinary devotion and holiness. He also dedicated time to tzedakah and chessed.

His sefer Orach L’Chaim bears haskamos of great Torah luminaries such as Harav Levi Yitzchak of Berditchev, the Maggid of Kozhnitz, the Chozeh of Lublin, and the Apter Rav, among others. This sefer, one of the distinguished sifrei Chassidus, was printed by his stepson after his petirah. He also was the mechaber of Pri Chaim on Avos and Haggadah shel Pesach; a number of his chiddushim are printed in the Sefer Haflaah.

In 1742, Charles VII was elected Holy Roman Emperor during the War of the Austrian Succession.

In 1848, James W. Marshall discovered a gold nugget at Sutter’s Mill in northern California, a discovery that led to the gold rush of ’49.

In 1908, the Boy Scouts movement began in England under the aegis of Robert Baden-Powell.

In 1924, the Russian city of Petrograd (formerly St. Petersburg) was renamed Leningrad in honor of the late revolutionary leader. It has since been renamed St. Petersburg.