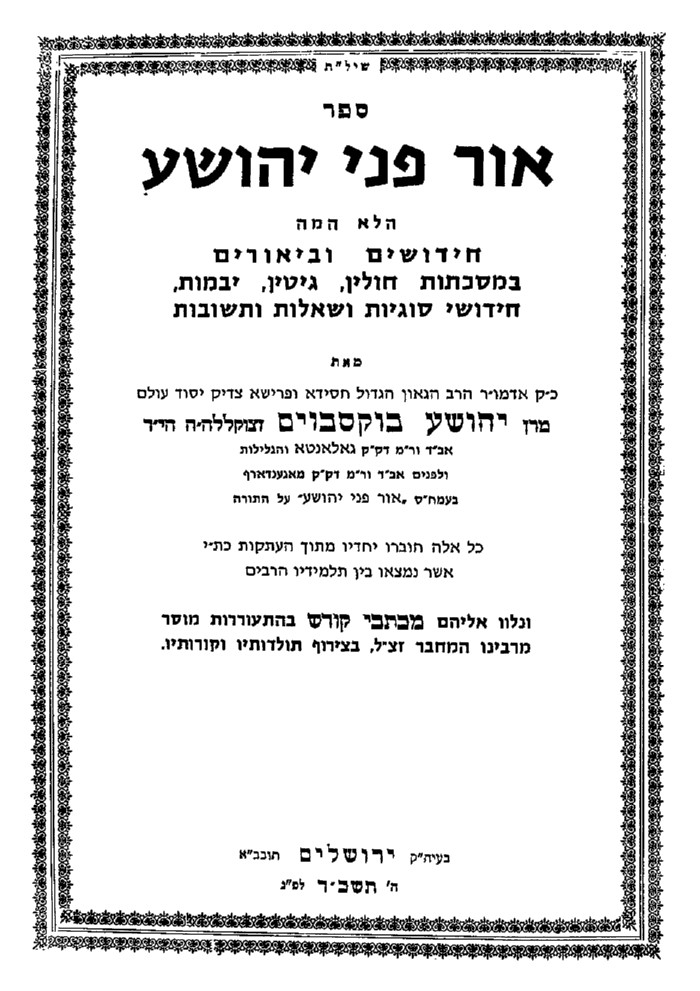 In 5408/1648, during the pogroms of Tach V’tat, the Jews of Alik were saved. The Taz established the custom that the community should fast half a day and recite special Selichos composed for the occasion; after chatzos all were to celebrate with a festive meal, akin to Purim.

Harav Yehoshua Buxbaum was born in Pupa, Hungary, in Shevat 5637/1877. His father was Reb Yosef, the town’s shochet and his mother was Esther.

Already in his youth, Reb Yehoshua displayed an intense thirst for Torah. At age 16, he was sent by his Rebbe, the Rav of Pupa, to Unsdorf to learn in the esteemed yeshivah of the Be’er Shmuel, zt”l. For six years he slept on hard wooden benches and subsisted on meager amounts of food. After that period, he received semichah from the Be’er Shmuel and from the Rav of Mad, the Levushei Mordechai.

In 5760/1900, Reb Yehoshua married Miriam, the daughter of Reb Chaim Meir Bloch, a naggid from Ujhely, who promised to support his son-in-law for 10 years. Reb Yehoshua utilized those years to attain ever-higher levels in Torah and avodas Hashem.

After 10 years, his father-in-law was unable to continue his support, and Reb Yehoshua planned to work as a milkman. But Heaven destined otherwise. The townspeople of Magendorf went to the Be’er Shmuel seeking a Rav, and he directed them to Reb Yehoshua, saying, “He is the most prized of my talmidim.”

Reb Yehoshua accepted their offer and was able to continue al haTorah v’al ha’avodah while supporting his family.

With time, talmidim gravitated to learn from him, and eventually an entire yeshivah evolved under his direction. The Be’er Shmuel encouraged his talmid every step of the way.

In 5682/1922, Reb Yehoshua was offered the rabbanus of Galanta, succeeding Harav Yosef Tzvi Dushinsky, who became Rav in Chust. Reb Yehoshua accepted the offer, since by then Magendorf did not have sufficient resources to accommodate a large yeshivah.

With his move to Galanta, his yeshivah grew amazingly. The Galanta Rav’s warmth and caring personality drew many talmidim to his yeshivah.

In 5704/1944, with the Nazi invasion of Hungary, the entire town of Galanta was deported to Auschwitz. Remarkably, a special order was received to take the Rav off the train headed to Auschwitz, but the Rav refused to leave his flock. During the hellish journey to that death camp, the Galanta Rav appeared unusually calm. Upon inquiry, he exclaimed, “We are on our way to Gan Eden!”

His chiddushim and biographical highlights were printed in Or Pnei Yehoshua and Nachal Yehoshua.

In 1791, King Louis XVI of France and his family attempted to flee in the “Flight to Varennes,” but were caught.