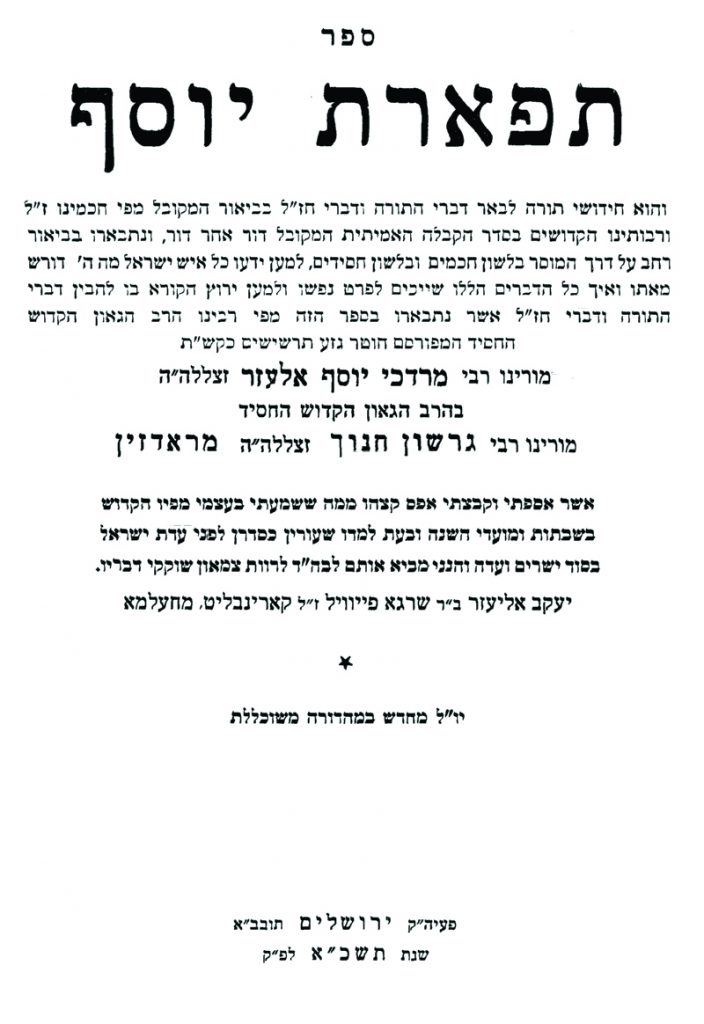 Following the petirah of his father in 5651/1891, Rav Mordechai Yosef was appointed Rebbe in Radzin, where he lived until the outbreak of World War I in 5674/1914. Forced to leave Radzin, he moved to Warsaw. His court attracted thousands of Chassidim.

Rav Mordechai Yosef was known as a Gadol baTorah and an expert in all its facets. He took it upon himself to refute the questions that arose on his father’s sefarim (his father was renowned for discoveries, the most famous undoubtedly being the techeilis), and published his father’s Ein HaTecheiles and Dalsos Shaarei Ha’Ir. His own divrei Torah were published under the name Tiferes Yosef.

He had a large library containing many sefarim of great value.

He was well respected by all the Gedolei Hador.

Rav Mordechai Yosef was niftar on 26 Shevat 5689/1929, at the age of 62. His levayah was well attended, despite a temperature well below zero. The local yeshivos were closed in honor of the levayah. He was succeeded by his son, Harav Shmuel Shlomo, Hy”d.

Harav Avraham Yissachar was crowned Radziner Rebbe in Eretz Yisrael after the Holocaust.

In 1790, the U.S. Supreme Court convened for the first time in New York. (However, since only three of the six justices were present, the court recessed until the next day.)

In 1943, during World War II, one of America’s most decorated military units, the 442nd Regimental Combat Team, made up almost exclusively of Japanese-Americans, was authorized.

In 1960, four black college students began a sit-in protest at a Woolworth’s lunch counter in Greensboro, North Carolina, where they had been refused service.

In 1968, Richard M. Nixon announced his bid for the Republican presidential nomination.

In 2003, the space shuttle Columbia broke up during re-entry, killing all seven of its crew members, including payload specialist Ilan Ramon, the first Israeli in space.