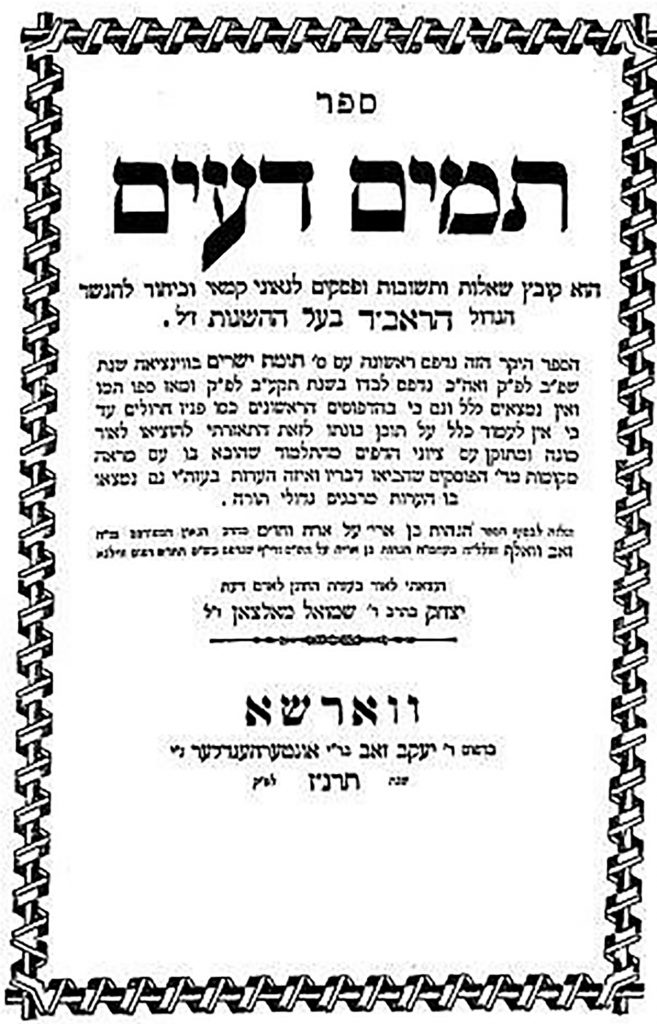 26 Kislev
The second day of Chanukah

In 4856/1095, the First Crusade was proclaimed. As they trekked toward Eretz Yisrael, the Crusaders killed tens of thousands of Jews all across Europe.

Harav Avraham ben David was born in Narbonne, France, in 4875/1115 (according to another opinion, in 4885/1125). He married the daughter of the Rav of the city, Harav Avraham ben Yitzchak (known as Raavad II), the mechaber of Sefer Ha’eshkol. He was also Rosh Yeshivah of the local yeshivah.

The city of Narbonne was well known for its talmidei chachamim. It was one of the main cities of Torah learning after the baalei Tosafos and the talmidim of Rashi and Rabbeinu Gershom Me’or Hagolah moved from northern France and settled there.

The Raavad’s main rebbeim included his father-in-law, whom he mentions and quotes many a time in his sefarim; Rabbeinu Meshulam MiLunel, at whose behest the Raavad translated Chovos Halevavos from Arabic to Lashon Hakodesh; and Rabbeinu Moshe ben Yosef ben Meron Levi, who was the Rosh Yeshivah in Narbonne.

The Raavad’s foremost desire was to be able to teach and spread Torah in all the cities across Provence (southern France). In order to do so, he moved from time to time, settling in different cities. In each city, the first thing he did was establish a yeshivah to teach the many talmidim who gathered to hear Torah from him. He first settled in Lunelle, where he was appointed Rav. Later, he moved on to Montepelier, where he remained for a short time, and then to Nîmes, where he lived for a longer period. Rabbeinu Moshe ben Yehudah (Temim De’im, siman 7) refers to the yeshivah in Nîmes, then under the Raavad’s direction, as the chief seat of Talmudic learning in Provence.

The center of the Raavad’s Torah activity was the city of Posquières; he is often called  Harav Avraham ben David of Posquières. He moved to Posquières in 4924/1164.

The Raavad lived in Posquières for eight years. Elzéar, the lord of Posquières, had him cast into prison. He might have perished there if not for Count Roger II of Carcassonne, who was friendly to the Jews, who intervened. Thereupon, the Raavad returned to Posquières, where he remained until his petirah.

The Raavad was a prolific author. He wrote teshuvos to hundreds of she’eilos; many of these responsa are still preserved in the sefarim Temim De’im, Oros Chaim and Shibbolei Haleket. He also wrote a commentary on many masechtos, including Bava Kama, Avodah Zarah, Eduyos and Kinnim.

In 1865, James H. Nason of Franklin, Massachusetts, received a patent for “an improved coffee percolator.”

In 1941, during World War II, Winston Churchill became the first British prime minister to address a joint meeting of the U.S. Congress. Churchill grimly warned that “many disappointments and unpleasant surprises await us,” but also expressed faith that “the British and American peoples will, for their own safety and for the good of all, walk together in majesty, in justice and in peace.”

In 1944, during the World War II Battle of the Bulge, the embattled U.S. 101st Airborne Division in Bastogne, Belgium, was relieved by units of the 4th Armored Division.