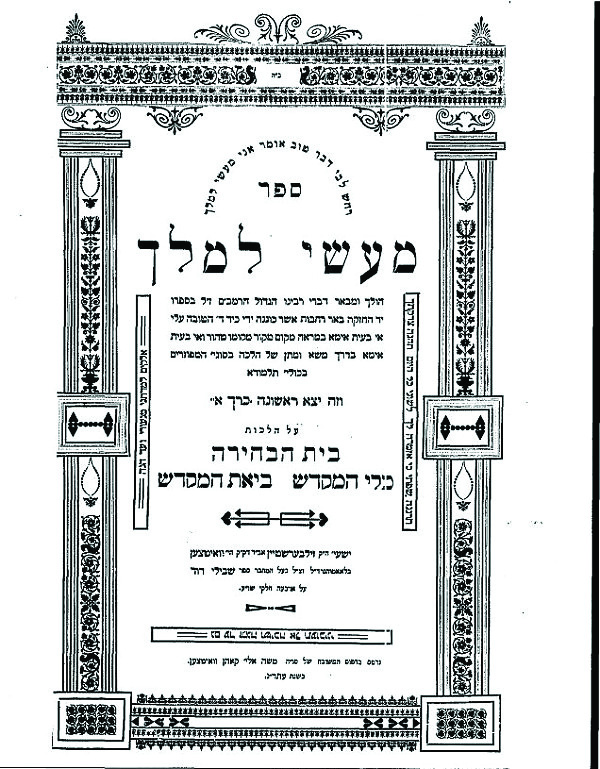 5662/1902, anti-Jewish rioters attacked the levayah of Harav Yaakov Yosef in New York City. When the entourage passed the R. Hoe and Company factory, its non-Jewish workers threw refuse and rocks at the bier. Local police arrived at the scene, and a terrible fight, heavy with anti-Semitic overtones, ensued. More than 300 Jews were hospitalized as a result.

In his early years he lived in Yerushalayim, where the Imrei Binah attested that he would become a Gadol b’Yisrael.

Later, Reb Yeshayah returned with his father to Hungary. While still a bachur, he became Rav in Terebesh. He corresponded with leading Gedolim of his era, including the Maharam Schick and others. He was counted among the three leading Gedolim in Hungary in his time.

Reb Yeshayah was renowned for his hasmadah. His first chiddushim were printed at the end of his father’s sefer.

After his marriage in 5639/1879 to the daughter of Harav Moshe Tzvi Stern, Rav of Elishtaba, he refused to support himself with Rabbanus and opened a factory instead. According to the testimony of residents of the city, his factory looked more like a sefarim store than a factory, as it was full of sefarim which Reb Yeshayah pored over at all hours of the day.

A few years later, at the age of 27, Reb Yeshayah became Rav in Weitzen. He founded a yeshivah and strengthened the kehillah in Torah and yiras Shamayim. He would learn for hours after Shacharis and put his chiddushei Torah to paper, all the while wrapped in his tallis and tefillin.

Reb Yeshayah served as Rav in Weitzen for close to 50 years, and was one of Hungarian Jewry’s outspoken leaders and fighters in its war against those who wished to do away with the mesorah.

In 1799, the Rosetta Stone, a tablet with hieroglyphic translations into Greek, was found in Egypt.

In 1870, France declared war on Prussia.

In 1941, Britain launched its “V for Victory” campaign for World War II.

In 1982, the U.S. Census Bureau reported that 14 percent of the population had an income below the official poverty level in 1981.