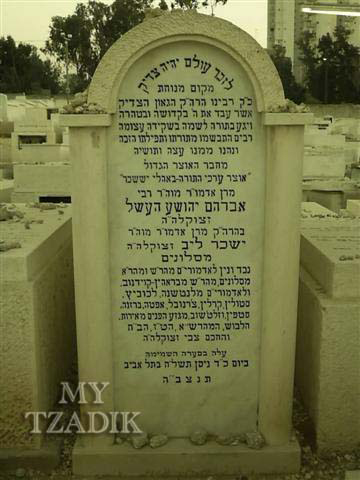 In 5698/1938, an embargo went into effect on the properties of Austrian Jews

Harav Avraham Yehoshua Heschel Weinberg was born in 5658/1898. His father was Harav Yissachar Leib of Slonim, zy”a, who was the son of the Divrei Shmuel, zy”a, and a great-grandson of the Yesod HaAvodah, zy”a.

Rav Avraham Yehoshua Heschel was brought up in the court of his grandfather the Divrei Shmuel in Slonim.

When he became of age, Rav Avraham Yehoshua Heschel was taken as son-in-law by Harav Dovid Weidenfeld of Warsaw, zt”l, a known talmid chacham who was also the father-in-law of the Beis Yisrael of Ger, zy”a, in his zivug sheini, after the war.

After his marriage, Rav Avraham Yehoshua Heschel settled in Warsaw, near his father-in-law.

Following the petirah of his father, on 28 Nisan 5688/1928, Rav Avraham Yehoshua Heschel was asked to lead the Slonimer Chassidus, but he was reluctant to become Rebbe; he would travel from Warsaw to Slonim from time to time, on set dates.

After the petirah of his father’s brother, Harav Avraham, who was Rebbe in Bialystock and later in Baranovitch, on Rosh Chodesh Iyar 5693/1933, Rav Avraham Yehoshua Heschel acquiesced to move to Slonim as Rebbe.

In 5695/1935, Rav Avraham Yehoshua Heschel moved to Eretz Yisrael, and settled in Tel Aviv, where he opened a beis medrash for the Slonimer Chassidim in the city.

He wrote an encyclopedic work based on Chazal’s words from the Gemara and Midrashim on all topics mentioned in Tanach. Seven volumes have been published thus far of his monumental set, Otzar Arachei HaTorah–B’Ohalei Yissachar, named for his father.

In 1789, George Washington took the oath of office in New York as the first president of the United States.

In 1803, the United States purchased the Louisiana Territory from France for 60 million francs, the equivalent of about $15 million.

In 1975, the Vietnam War ended as the South Vietnamese capital of Saigon fell to Communist forces.