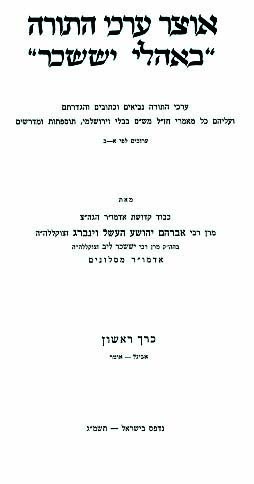 In 5698/1938, an embargo went into effect on the properties of Austrian Jews.

Harav Avraham Yehoshua Heschel Weinberg was born in 5658/1898 to Harav Yissachar Leib of Slonim, zt”l, son of the Divrei Shmuel and grandson of the Yesod HaAvodah. He was raised in the Divrei Shmuel’s court in Slonim. Later he became the son-in-law of Harav Dovid Weidenfeld of Warsaw, zt”l, a talmid chacham who was also the father-in-law of the Beis Yisrael of Ger, zy”a, in his zivug sheini (after the war).

After his marriage, Rav Avraham Yehoshua Heschel settled in Warsaw near his father-in-law. Following the petirah of his father on 28 Nisan 5688/1928, he was asked to lead the Slonimer Chassidus, but he was reluctant to become Rebbe; he only agreed to go from Warsaw to Slonim from time to time, on set dates.

Then, after the petirah of his father’s brother, Harav Avraham, zy”a, who was Rebbe in Bialystock and later in Baranovich, on Rosh Chodesh Iyar 5693/1933, Rav Avraham Yehoshua Heschel acquiesced to become Rebbe in Slonim. However, in 5695/1935 he moved to Eretz Yisrael, settling in Tel Aviv where he opened a beis medrash for the Slonimer Chassidim there.

He wrote an encyclopedic work based on the words of Chazal in the Gemara and Midrashim on all topics mentioned in Tanach. Seven volumes have been published to date of this monumental project, Otzar Arachei haTorah b’Oholei Yissachar, named for his father.

Rav Avraham Yehoshua Heschel was niftar on 25 Nisan 5738/1978, at the age of eighty, and buried in Bnei Brak near the kever of the Ozherover Rebbe, zy”a. He left two sons: Harav Shmuel, zt”l, who was deputy mayor of Bnei Brak, and Harav Aryeh, zt”l, Rosh Yeshivas Shuvu Banim.

In 1816, the U.S. government approved the creation of a second Bank of the United States.

In 1957, Egypt reopened the Suez Canal to all shipping traffic. The canal had been closed due to wreckage resulting from the Suez Crisis.

In 1972, the United States and the Soviet Union joined some 70 nations in signing an agreement banning biological warfare.