This Day In History 25 Nisan/April 10 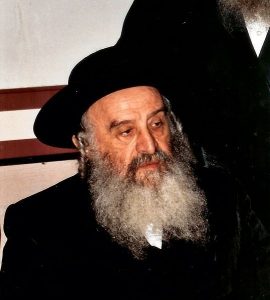 Harav Moshe Halberstam was born in the town of Tshakawe, Galicia, to Harav Yaakov Halberstam, zy”a, and his wife, Aidel Dina Moskowitz, a”h, daughter of Harav Shalom Moskowitz, Shatzer Rebbe of London, zy”a. He was a great-great-great grandson of the Divrei Chaim of Sanz, zy”a.

As a youth, he studied at Yeshivas Beis Avraham Slonim under the Nesivos Shalom of Slonim, zy”a. His Rebbi muvhak was Harav Shmuel Wosner, zt”l, Rav of the Zichron Meir neighborhood of Bnei Brak and Rosh Yeshivah of Yeshivas Chachmei Lublin of Bnei Brak.

Rav Moshe was a talmid chacham of note and delivered shiurim for decades in a kollel for Halachah that he headed. As a member of the Eidah Hachareidis beis din, he would answer she’eilos and oversee the kashrus division. He was the Rosh Yeshivah of Yeshivas Tshakawe and the Rav of Shaarei Tzedek hospital. In 5757/1997, he was appointed a member of the Badatz in Yerushalayim.

He published a collection of responsa called Divrei Moshe and wrote many approbations for various sefarim. He also founded the Vaad HaRabbonim LeInyonei Tzedaka, and was the head gabbai tzedakah of Kollel Chibas Yerushalayim Kupas Rebbe Meir Baal Haness.

In 1899, the treaty ending the Spanish-American War was declared in effect.

In 1968, President Lyndon B. Johnson signed into law the Civil Rights Act of 1968, which included the Fair Housing Act, a week after the assassination of the Rev. Martin Luther King Jr.

In 1970, Apollo 13 blasted off on its ill-fated mission to the moon. The astronauts managed to return safely.