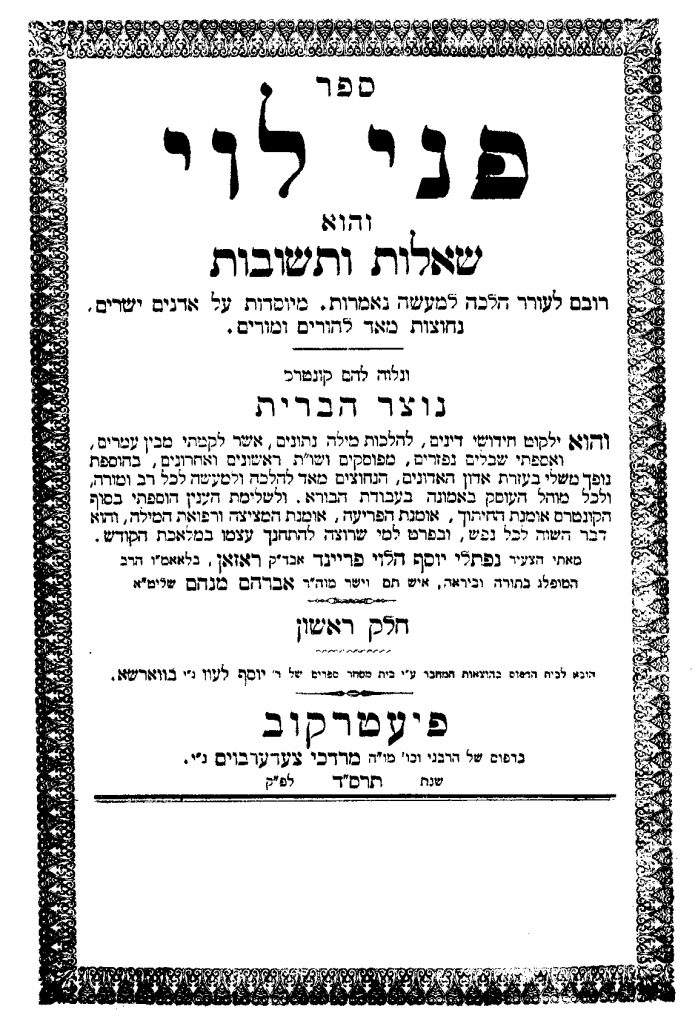 A loyal Gerrer Chassid, Reb Naftali Hertz and his children traveled to the Chiddushei Harim and later to the Sfas Emes, zechusam yagein aleinu.

Rav Naftali Yosef learned in the great yeshivos of Europe where he excelled in his studies. As a bachur he corresponded with many Gedolei Torah, among them Harav Menachem Nachum Ginzburg, zt”l, who served as Dayan in Mezritch.

Rav Menachem Nachum was a fervent misnagid, despite being an uncle of the Imrei Emes of Ger. When he received the Torah letters of this young lad, he invited him to visit him.

During that visit, the elderly Rav and the young bachur discussed topics that spanned the entire gamut of Torah. Rav Menachem Nachum was so impressed by this bachur that he suggested him as a shidduch for his granddaughter, Fraidel.

After the chasunah, Rav Naftali Yosef desired to continue learning Torah undisturbed, but it was destined otherwise. His in-laws and grandfather-in-law disapproved of his frequent travels to Gur. When they asked his young wife to divorce him due to this, she refused, so they terminated financial support to the couple. Thereupon, at the age of 25, at the behest of his revered Rebbe, Rav Naftali Yosef accepted a rabbanus.

“The Ruzhaner Rav,” as he was called, strengthened Yiddishkeit greatly. He established a cheder and a kupas gemach, and upgraded the kehillah’s existing mosdos. His hasmadah impacted the entire shtetl; every Yid attended at least one Torah shiur.

Rav Naftali Yosef was so beloved in town that when the winds of haskalah and Zionism began to blow, his authority overrode their evil schemes. He established Tiferes Bachurim, where the youth and older bachurim gathered and learned. For the girls, he established a branch of Bais Yaakov in Ruzhan, led by his son-in-law, Harav Chaim Binyamin Veyernik, zt”l.