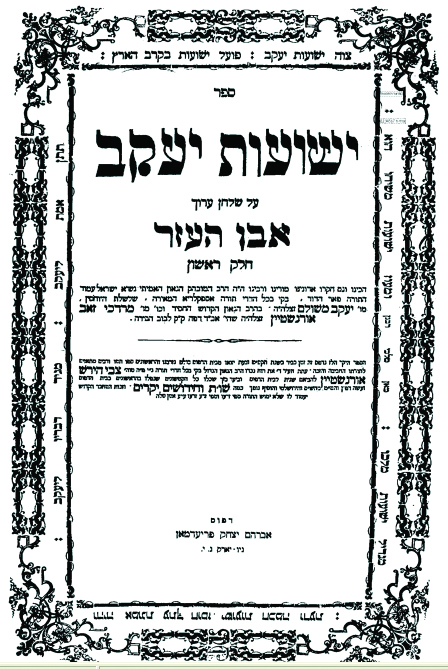 In 5567/1807, many Jews of Copenhagen were killed when the British bombarded the city during the Anglo-Russian War that raged between 1807 and 1812, Hy”d.

The Yeshuos Yaakov was born about 5530/1770. His parents were Harav Mordechai Zev, zt”l, a noted mekubal and the Rav of Alesk, and his Rebbetzin, a”h, both descendants of the Chacham Tzvi.

Harav Mordechai was niftar when Yaakov Meshulem was still a bachur. Soon after being orphaned, Yaakov Meshulem got engaged to the granddaughter of the renowned Harav Naftali Tzvi of Yarislav, zt”l. After the chasunah he moved into his shver’s house. Under the influence of his father-in-law he continued to grow in Torah, and after a while talmidim assembled around him.

In 5580/1820, Harav Yaakov Meshulem became Rav in Lvov (Lemberg), where he disseminated Torah on a large scale, attracting many talmidim, and coming in contact with Gedolim.

The Yeshuos Yaakov had an open home and an open heart for whoever was in need. He fought the Haskalah that threatened the existence of Torah-true Yiddishkeit in Europe. He was successful in that the movement did not take firm root during his lifetime.

The Yeshuos Yaakov had a son, Mordechai Zev, whom he cherished. In his sefarim he frequently quotes his son’s chiddushim. This son became deathly ill in his prime. During his illness the Yeshuos Yaakov davened intensely and did all in his power to invoke Heavenly mercy, but his son was tragically niftar on 17 Cheshvan 5597/1836.

Yaakov knew no peace as he lamented his beloved son, and close to three years later he himself was niftar and buried in Lvov.

The Yeshuos Yaakov was considered one of the leaders of his generation. The Chasam Sofer held the Yeshuos Yaakov in the highest esteem, and delivered a tearful hesped, which is printed in Drashos Chasam Sofer. (The date mentioned there determined 25 Av as the yahrtzeit; others seemed to have erred, asserting it was 21 Av.)

In 1962, Jamaica, formerly ruled by Britain, became an independent dominion within the Commonwealth of Nations.

In 1986, William J. Schroeder died after living 620 days with the Jarvik-7 artificial heart.