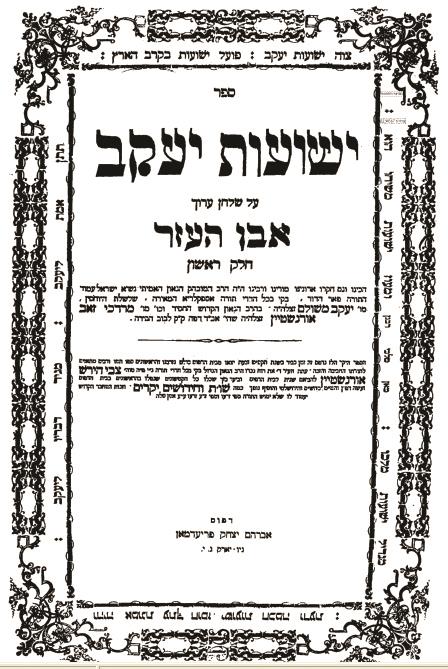 In 5567/1807, many Jews of Copenhagen were among those killed when the British bombarded the city during the Anglo-Russian War that raged between 1807 and 1812. Hy”d.

The Yeshuos Yaakov was born about 5530/1770. His father was Harav Mordechai Zev, a mekubal and the Rav of Alesk; he and his Rebbetzin were both descendants of the Chacham Tzvi.

Harav Mordechai was niftar when Yaakov Meshulem was still a bachur. Soon after being orphaned, Yaakov Meshulem got engaged to the granddaughter of the renowned Harav Naftali Tzvi of Yarislav. After the chasunah he moved into his father-in-law’s house, where he found a wellspring of Torah and a warm, welcoming home. Under his father-in-law’s influence, he continued to grow in Torah. After a while, talmidim were drawn to him.

In 5561/1801, Harav Yaakov Meshulem was asked to fill the Rabbinical vacancy in the city of Zalkava and its environs, replacing Harav Tzvi Hersh Meiseles, zt”l. In the introduction to Yeshuos Yaakov, Harav Yaakov Meshulem writes about the satisfactory conditions in that city: its residents were bnei Torah and adhered strictly to mitzvos.

After the petirah of Harav Tzvi Hersh Rosen, zt”l, mechaber of Teisha Shittos, in 5580/1820, Harav Yaakov Meshulem was called to replace him as Rav in Lvov (Lemberg). There he realized his dream of disseminating Torah on a large scale, attracting many talmidim, and coming in contact with Gedolim.

In 5569/1809, Harav Yaakov Meshulem published Yeshuos Yaakov, a peirush on all four parts of Shulchan Aruch. It became the sefer of choice among contemporary scholars. In it Harav Yaakov Meshulem solves the most difficult problems in halachah, using his ability in pilpul and iyun. The Divrei Chaim of Sanz, zt”l, said that all the sefarim up to and including Yeshuos Yaakov were written with ruach hakodesh.

The Yeshuos Yaakov had an open home and an open heart for whoever was in need. Together with his diligence and greatness in Torah, he never neglected community matters. He fought the “enlightenment” movement that plagued Europe at that time and threatened the existence of Torah-true Yiddishkeit. He was successful in that haskalah did not take firm root during his lifetime.

At one point the maskilim wished to negotiate with him so they could come to a compromise. The Yeshuos Yaakov adamantly refused, claiming that compromising with haskalah is equivalent to compromising on the Shema Yisrael and other fundamentals of Yiddishkeit.

The Yeshuos Yaakov had a son, Mordechai Zev, whom he cherished. In his sefarim he frequently quotes his son’s chiddushim. This son became deathly ill in his prime. During his illness the Yeshuos Yaakov davened intensely and did all in his power to invoke Heavenly mercy, but his son was tragically niftar on 17 Cheshvan 5597/1836.

Harav Yaakov Meshulem was beside himself. During the hesped he interpreted a maamar Chazal that states that when a father eulogizes a son, the sun becomes defective. As he uttered those words, sudden torrential rains came pouring down, as if the skies literally agreed with that pshat.

After this event, the Yeshuos Yaakov knew no peace as he lamented his beloved son, and close to three years later he himself was niftar and was buried in Lvov.

The Yeshuos Yaakov was considered one of the leaders of his generation, along with such greats as the Chasam Sofer. The Chasam Sofer held the Yeshuos Yaakov in the highest esteem, and delivered a tearful hesped when he was niftar. (The hesped is printed in Drashos Chasam Sofer, and it is the date mentioned there that determined 25 Av as the yahrtzeit; others seemed to have erred, asserting that it was 21 Av.)

In 1831, Nat Turner led a slave rebellion in Virginia resulting in the deaths of at least 55 white people. (He was later executed.)

In 1940, exiled Communist revolutionary Leon Trotsky died in a Mexican hospital from wounds inflicted by an assassin the day before.

In 1972, the Republican National Convention opened in Miami Beach.

In 1991, the hardline coup against Soviet President Mikhail S. Gorbachev collapsed in the face of a popular uprising led by Russian Federation President Boris N. Yeltsin.

In 1993, in a serious setback for NASA, engineers lost contact with the Mars Observer spacecraft as it was about to reach the red planet on a $980 million mission.