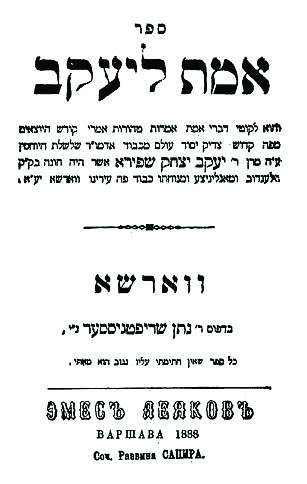 Harav Yaakov Yitzchak Shapira was the son of Reb Chaim Meir Yechiel of Mogelnitza and grandson of the Kozhnitzer Maggid. His father named him after the Yehudi Hakadosh of Peshischa.

His father, Reb Chaim Meir Yechiel, was the son-in-law of Reb Elazar, the son of the Rebbe Reb Elimelech of Lizhensk. This combination of the courts and ways of Kozhnitz and Lizhensk formed Reb Yaakov Yitzchak into a rich personality, known for his tzidkus and chassidus.

Reb Yaakov Yitzchak was a talmid of his father and learned with him constantly.

He married the daughter of Harav Aryeh Leibish Neuhaus, Rav of Chelm and Tomashov.

After the petirah of his father in 5609/1849, Reb Yaakov Yitzchak became Rebbe in Blendov, where he disseminated the words and teachings of Chassidus. He was known for his emotional tefillos.

His divrei Torah were collected and printed under the name Emes L’Yaakov.

In 1908, the Tunguska Event took place in Russia as an asteroid exploded above Siberia, leaving 800 square miles of scorched or blown-down trees.

In 1954, the total eclipse of the sun was seen around the world in Europe, the United States and Asia, including Pakistan and India. The longest duration of total eclipse was two minutes 35 seconds. Solar eclipses are normally only seen by a small, specific area of the world, so this was unusual as it was seen from so many continents.