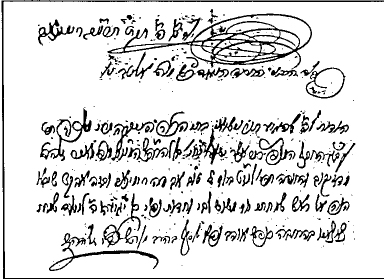 In 2449, Bnei Yisrael paused at Marah after they crossed the Yam Suf. The Gemara in Sanhedrin (56b) relates: In Marah, Hashem commanded the Jews to observe 10 mitzvos, which were the seven Mitzvos Bnei Noach, plus monetary laws, Shabbos, and kibbud av va’eim.

In 3412 , Daniel saw a vision. The passuk says (Daniel 10:5-12): “On the shore of the Chiddekel River, a man clothed in linen … his face like the appearance of lighting, his eyes like flaming torches … was revealed to Daniel. [According to most meforshim, the ‘man’ was Gavriel.] And the people (Chaggai, Zecharia, and Malachi) did not see him … And the man comforted him: ‘Do not fear, Daniel, for from the first day that you set your heart to understand and to fast before your G-d, your words have been heard.’” (See meforshim there for further explanation.)

Harav Yosef was born to his holy father, Harav Tzvi Hersh Hakohen Meshores of Riminov, zy”a, from his third marriage. After losing many children, the only children of Harav Tzvi Hersh who survived were Harav Yosef and a sister, who was about three years older than him.

Harav Tzvi Hersh’s Rebbetzin remarried to Harav Yisrael of Ruzhin, zy”a, and Yosef moved into the holy Ruzhiner’s home. When the Ruzhiner’s grandchildren stood in a row to wish their grandfather “Gut Shabbos,” 3-year-old Yosef also got in line. When his turn came, his stepfather kissed him on the head and said, “You are actually named after Yosef Hatzaddik.”

When Harav Yisrael of Ruzhin was niftar four years later, Rav Yosef was raised by his son, Harav Avraham Yaakov of Sadigura, zy”a. (He adopted the name Friedman, the family name of the Ruzhiner dynasty.)

In 5627/1867, when Rav Yosef was 23, his mentor and Rebbe, Harav Avraham Yaakov of Sadigura, instructed him to return to Riminov and to inherit his father’s Chassidus. He even provided him with the financial support to build a magnificent beis medrash. Rav Yosef complied, and with his return to Riminov the Chassidim once again flocked to the bastion of chassidus that they had once known. The Sadigura Rebbe traveled to Riminov for a Shabbos to personally install Rav Yosef as Rebbe.

In 1852, the first edition of Peter Roget’s Thesaurus was published.

In 1879, in Cleveland, Ohio, electric arc lights were used for the first time.

In 1998, Brazil announced a plan to protect a large area of Amazon forest. The area was about the size of Colorado.