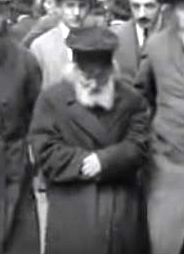 In 3410/351 B.C.E., Hashem awakened the spirit of Zerubavel and Yehoshua ben Yehotzadok to begin the work of building the Second Beis Hamikdash.

When the Chofetz Chaim was 14 years old, his father, Reb Aryeh Zev Hakohen, succumbed to an epidemic that was raging in Vilna. His older brother, Aharon, took care of him for the next three years. At the age of 17, he married and moved to the town of Radin, Poland, and settled there in the home provided by his Rebbetzin’s parents.

He studied Torah continually while his Rebbetzin operated a small general store that provided a meager livelihood. Many times the Chofetz Chaim would say to his son, “The little Torah that I possess is attributable to your mother.”

From the beginning, the Chofetz Chaim showed great concern for the townspeople of Radin. He conducted daily shiurim for them in Shulchan Aruch between Minchah and Maariv. His teaching was always mixed with a little mussar. On Shabbos afternoons he would teach Chumash with Rashi, likewise emphasizing kedushah and yiras Shamayim.

The Chofetz Chaim learned Torah in great depth, starting from the source and proceeding through all the commentaries until the final halachah: Chumash, then Chazal on the Chumash, then Targum, Rashi, and Ramban, then Mishnah and Gemara, then Rif and Rambam, then the other Rishonim, and, finally, Tur and Shulchan Aruch.

In 5644/1884, the first volume of Mishnah Berurah was published. Throughout the printing, he remained in Warsaw and visited the printer daily to check for errors. He felt he could not rely on anyone else; a work of halachah had no room for mistakes.

He placed his name, Yisrael Meir ben Reb Aryeh Zev Hakohen of Radin, on the title page of the Mishnah Berurah. He explained that “a halachah sefer must be open to criticism by bnei Torah, and the mechaber must be prepared to defend his psakim and to cite the authorities for them.” Other sefarim of the Chofetz Chaim include Ahavas Chessed, Machaneh Yisrael, Nidchei Yisrael, Shemiras Halashon, Toras Habayis, Shem Olam and Likutei Halachos on Kodashim.

In 1779, John Adams was named by Congress to negotiate the Revolutionary War’s peace terms with Britain.

In 1928, the United States said it was recognizing the Nationalist Chinese government.

In 1939, Warsaw, Poland, surrendered after weeks of resistance to invading forces from Nazi Germany and the Soviet Union during World War II.

In 1979, Congress gave its final approval to forming the U.S. Department of Education.