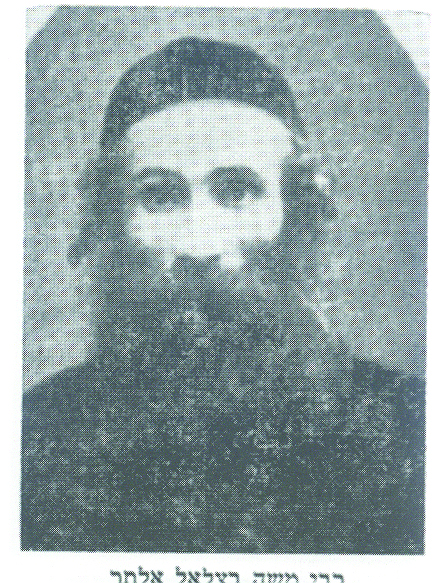 In 1656/2105 B.C.E., Noach opened the window of the teivah and dispatched the dove for the second time (according to Rabi Eliezer). “The dove came in to him in the evening, and in her mouth was an olive leaf plucked off; and Noach knew that the waters were abated from off the earth.” (Bereishis 8:11)

Harav Moshe Betzalel Alter was the second son of Harav Yehudah Aryeh Leib of Ger, zy”a, the Sfas Emes. He was born in 5628/1868. His father named him Moshe Betzalel, saying that he would like to have a son like the two malachim in that week’s parashah, Moshe Rabbeinu and Betzalel, who built the Mishkan.

Rav Moshe Betzalel married the daughter of Harav Shimon Chaim Alter, brother of the Sfas Emes, and settled in Ger.

Rav Moshe Betzalel had a sharp mind, in the Kotzk style. He was an outstanding masmid and lamdan. His father the Sfas Emes said of him that he was a tzaddik tamim.

Rav Moshe Betzalel was chosen by the Imrei Emes to be the baal toke’a in the beis medrash in Ger on Rosh Hashanah. It is related that from merely hearing his brachos before the tekios, many Chassidim already had a hirhur teshuvah.

At the outbreak of World War II, Rav Moshe Betzalel moved with the Imrei Emes to Warsaw until a rescue effort for the Rebbe was undertaken, and he managed to escape the Nazi inferno and ascend to Eretz Yisrael. The original plan called for Rav Moshe Betzalel to join the Rebbe, but he chose to stay behind with the people. Rav Moshe Betzalel was taken to the Warsaw Ghetto and forced to work like other Jews. Many stories have been related of his mesirus nefesh for mitzvos in the ghetto.

On Tishah B’Av 5702/1942, the liquidation of the Warsaw Ghetto began. Many were sent to their deaths in Treblinka and Auschwitz. Only those who were still fit to work were left behind. The Gerrer Chassidim persuaded the Nazis to let Rav Moshe Betzalel stay; he was forced to work in a shoe factory. Rav Moshe Betzalel provided much chizuk to the remaining Chassidim, with his encouraging words.

In the summer of 5703/1943, Rav Moshe Betzalel was taken with a large group of Jews from Warsaw to Treblinka. He was murdered by the Nazis, yemach shemam, on 23 Elul.

In 1814, Francis Scott Key was inspired to write the poem “Defence of Fort McHenry” (later “The Star-Spangled Banner”) after witnessing the American flag flying over the Maryland fort following a night of British naval bombardment during the War of 1812.

In 1829, the Treaty of Adrianople was signed, ending war between Russia and the Ottoman Empire.

In 1941, Vermont passed a resolution enabling its servicemen to receive wartime bonuses by declaring the U.S. to be in a state of armed conflict, giving rise to headlines that Vermont had “declared war on Germany.”

In 1991, the government of South Africa, the African National Congress and the Inkatha Freedom Party signed a national peace pact.