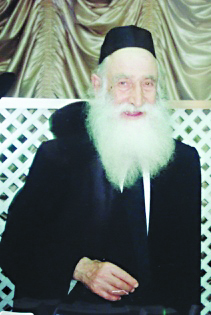 In 3598/164 B.C.E., the stones that gentiles set up in the Beis Hamikdash during the rule of the Greeks were removed.

Before his bar mitzvah, he went to learn Torah in Slonim.

He went on to Yeshivas Grodno, where he became a talmid muvhak of Harav Shimon Shkop. He also became one of the first talmidim of Harav Baruch Ber Leibowitz, mechaber of Birkas Shmuel, who would recite his shiur to the young Tzvi Hirsch and two other top talmidim before delivering it to the rest of the yeshivah.

As dark clouds began to gather over Europe, Reb Tzvi Hirsch moved to Eretz Yisrael to evade the draft, narrowly escaping the Holocaust.

In Eretz Yisrael, he resumed his learning at Yeshivas Lomza in Petach Tikvah.

In 5703/1943 he married the daughter of Harav Shabsai Yogel, who appointed him Maggid Shiur at Yeshivas Slonim in Ramat Gan.

For the next six decades he taught Torah to thousands and formed close bonds with many Gedolei Hador, notably the Chazon Ish and the Brisker Rav.

While serving in the Slonimer yeshivah he became Rav of Ramat Gan. He fought against Shabbos desecration and breaches in kedushah and kashrus, and wrote a sefer, Benesivos Ha’emunah, which clarified issues related to hashkafah and emunah. He showed genuine concern for all of the city’s residents and persuaded many of them to send their sons to yeshivos. Civic leaders did not make any move related to spiritual matters without consulting him.

In 5742/1982 he was appointed Rosh Yeshivah of Yeshivas Karlin-Stolin, where he disseminated Torah for over 20 years.

When he moved to Yerushalayim, his home became a center for Torah.

In his last few years, he devoted his strength to preparing his sefarim for publication.

In 1865, Mississippi became the first Southern state to enact laws that came to be known as “Black Codes” aimed at limiting the rights of newly freed blacks; other states of the former Confederacy soon followed.

In 1941, the U.S. Supreme Court, in Edwards v. California, unanimously struck down a California law prohibiting people from bringing indigent non-residents into the state.

In 1944, during World War II, U.S. bombers based on Saipan attacked Tokyo in the first raid against the Japanese capital by land-based planes.