This Day in History – 23 Cheshvan/November 21

In 3598, the stones that gentiles set up in the Beis Hamikdash during the rule of the Greeks were removed. 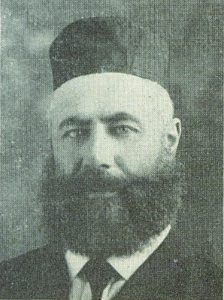 Harav Yaakov Dovid Gordon was born in 5633/1873 in a suburb of Kovno, Lithuania, into a prestigious rabbinical family: both his father, Rav Yehudah, zt”l, and his uncle, Rav Yosef, zt”l, were Rabbanim there. At the age of five, Yaakov Dovid lost his father, and went to live with his uncle Rav Yosef Gordon. In 5644/1884, after a fire destroyed his uncle’s house, he was sent to the Yeshivah of Harav Yosef Resnik, zt”l.

After becoming bar mitzvah, he went to Yeshivas Telshe. While in there, Rav Yaakov Dovid enjoyed a close relationship with the Rosh Yeshivah, Harav Eliezer Gordon, zt”l. Rav Yaakov Dovid was known for his hasmadah as well as his vast knowledge of Sidrei Nashim and Nizikin.

Rav Yaakov Dovid authored many books on Torah, Aggadah, and Halachah, among them Dor V’Dorshov and Zichron Yaakov.

In 5665/1905, Rav Yaakov Dovid accepted an invitation from the Chicago Jewish Community to serve as their Rav. A year and a half later he was appointed the Chief Rabbi of Norfolk, Virginia. Rav Gordon was also an influential member of Agudath HaRabbonim of America.

Rav Yaakov Dovid was Rav of Norfolk for over forty years, until his passing on 23 Cheshvan, 5709/1948. He was buried in Union Field Cemetery in Ridgewood, Queens. Many of his descendants are bnei Torah living in Lakewood, Monsey, and Brooklyn.

In 1967, President Lyndon B. Johnson signed the Air Quality Act.

In 1990, junk-bond financier Michael R. Milken, who had pleaded guilty to six felony counts, was sentenced by a federal judge in New York to ten years in prison. (Milken served two.)

In 1992, a three-day tornado outbreak that struck 13 states, began in the Houston area before spreading to the Midwest and eastern U.S.; 26 people were killed.

In 2001, Ottilie Lundgren, a 94-year-old resident of Oxford, Conn., died of inhalation anthrax; she was the apparent last victim of a series of anthrax attacks carried out through the mail system.