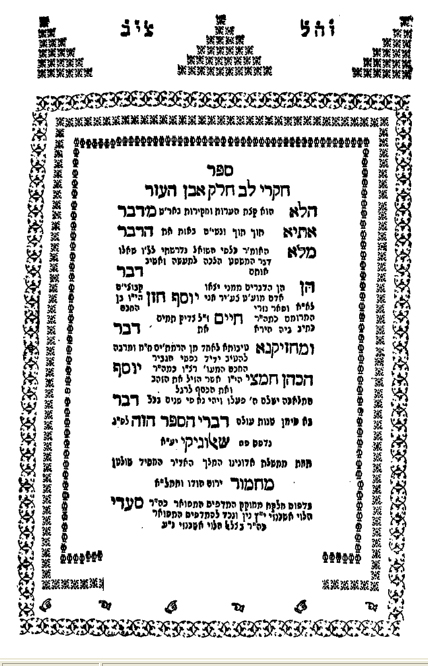 Harav Refael Yosef Chazan was born in 5501/1740, in Izmir, Turkey. His father was Harav Chaim. The Chazan family was well known in the Sephardic community, descending from many Sephardic Gedolim, most notably the paytan (poet) Harav Avraham Chazan, zt”l, author of the piyut “Achos Ketanah” that many say on Erev Rosh Hashanah after Minchah.

Harav Chaim was the son of Harav David Chazan, zt”l, mechaber of Chozeh David, a peirush on Tehillim, and a descendant of Harav Yosef Chazan, zt”l, who was a talmid of the Ri MiTrani. It was after this grandfather that Rav Chaim named his son Yosef.

Rav Refael Yosef unfortunately lost his father at a young age. He wrote about this period in the hakdamah of his sefer, Chikrei Lev, expressing gratitude to all those who cared for him during those years and noting the encouragement offered by family members.

The hasmadah of young Refael Yosef was legendary. He was able to sit for hours on end and learn without interruption.

In 5550/1790, Rav Refael Yosef was appointed Rav and Dayan in Izmir. Later, in 5554/1794, against his wishes, he was appointed full leader of the city’s Torah community as well as Rosh Yeshivah.

Rav Refael Yosef delivered many fiery drashos, leading his listeners to improve themselves. His grandson, Rav Chaim Palagi, relates that his grandfather once explained to him that Chazal say that regarding one who speaks in public, Ruach Hakodesh rests on him; therefore, he was overcome with fear of the Shechinah. That is why he became so inflamed during his drashos.

Rav Refael Yosef had a steady mussar seder every morning with a local talmid chacham of the city.

Rav Refael Yosef became the leader of all communities, Ashkenazim and Sephardim. There is much correspondence between him and the leading talmidim of the Gra who moved to Eretz Yisrael around that time.

Rav Refael Yosef was niftar on 23 Cheshvan, 5581/1820. He was buried on Har Hazeisim, in the kever he had bought during his lifetime.

Rav Refael Yosef left 13 volumes of his classic Chikrei Lev, covering thousands of teshuvos on all topics of Torah and halachah. His many drashos were printed in the two-volume Ma’archei Lev, which was printed in Salonika directly after his petirah, in the years 5581-82/1821-22.

In 1765, the Stamp Act, passed by the British Parliament, went into effect, prompting stiff resistance from American colonists.

In 1870, the United States Weather Bureau made its first meteorological observations.

In 1936, in a speech in Milan, Italy, Benito Mussolini described the alliance between his country and Nazi Germany as an “axis” running between Rome and Berlin.

In 1991, Clarence Thomas took his place as the newest justice on the Supreme Court.