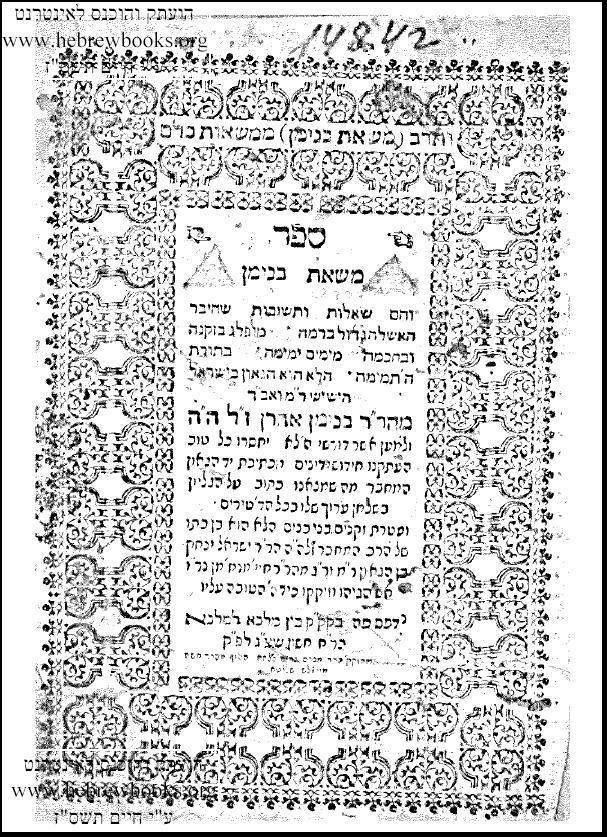 In 5665/1905, a pogrom took place in Zhitomir, Ukraine, costing many Jewish lives, Hy”d, plus the life of a Russian student

who tried to help the Jews.

Harav Binyamin Aharon Solnik, son of Rav Avraham, was a talmid of the Rema and of the Maharshal, and one of the leading talmidei chachamim in Cracow.

After the Rema’s petirah, Harav Binyamin Aharon moved to Silesia and later to Podheitz. He corresponded in halachic matters with many Gedolim of his time, notably the Maharam of Lublin; Harav Yosef Steinhart, the Zichron Yosef; and Harav Mordechai Yaffe, the Levush. His sefer Mas’as Binyamin includes 112 teshuvos.

Harav Binyamin Aharon’s sons were all Gedolim. His son Harav Yaakov Yukel was the mechaber of Nachalas Yaakov on Rashi’s commentary on the Torah. Harav Avraham was Rav of Tarnopol and later Rav in Brisk.

His son-in-law was Harav Menachem Mann, Rav in Vienna and later Chief Rabbi of Austria.

In 14 C.E., Caesar Augustus, Rome’s first emperor, died at age 76 after a reign lasting four decades; he was succeeded by his stepson Tiberius.

In 1812, the USS Constitution defeated the British frigate HMS Guerriere off Nova Scotia during the War of 1812, earning the nickname Old Ironsides.

In 1814, during the War of 1812, British forces landed at Benedict, Maryland, with the objective of capturing Washington, D.C.

In 1936, the first of a series of show trials orchestrated by Soviet leader Josef Stalin began in Moscow as 16 defendants faced charges of conspiring against the government. (All were convicted and executed.)

In 1942, during World War II, about 6,000 Canadian and British soldiers launched a disastrous raid against the Germans at Dieppe, France, suffering more than 50 percent casualties.

In 1974, U.S. Ambassador Rodger P. Davies was fatally wounded by a bullet that penetrated the American embassy in Nicosia, Cyprus, during a protest by Greek Cypriots.

In 1991, Soviet hard-liners made the stunning announcement that President Mikhail S. Gorbachev had been removed from power. (The coup attempt collapsed two days later.)