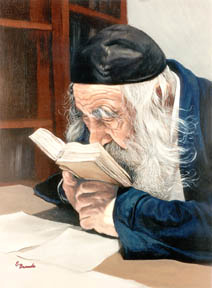 In 5665/1905, a pogrom took place in Zhitomir, Ukraine, costing many Jewish lives, Hy”d, plus the life of a Russian student who tried to help the Jews.

Harav Yaakov Yisrael Kanievsky was born to Reb Chaim Peretz, a local shochet, in 5659/1899 in Hornsteipel, the town for which he gained the appellation of “the Steipler Gaon.” Reb Chaim Peretz was an ardent Chassid of Harav Mordechai Dov of Hornsteipel, zt”l (a son-in-law of the Divrei Chaim of Sanz), and he named his son after Harav Mordechai Dov’s grandfather, Harav Yisrael Yaakov of Cherkass, zt”l.

At a young age, Rav Yaakov Yisrael went to learn under the Alter of Novardok in Homel, Russia, where he devoted himself to learning Torah. After the Bolshevik Revolution in 5677/1917, the yeshivah was persecuted severely by the Communists, and the bachurim suffered.

Nonetheless, the talmidim maintained their schedule of learning and even advanced in Torah and yiras Shamayim, to the dismay of the Communists, who retaliated by drafting the yeshivah students into the Russian army, including Rav Yaakov Yisrael.

When he was discharged, the Steipler devoted himself completely to teaching Torah in the Novardok tradition. He traveled widely throughout Russia, setting up yeshivos wherever he went. This soon put his life in danger, though, so he fled to Bialystok, Poland, to the yeshivah of Harav Avraham Yoffen, zt”l.

In 5685/1925, the Steipler published his first sefer, Shaarei Tevunah, on various topics in Shas. When the Chazon Ish saw it, he was highly impressed by the depth of its chiddushim and suggested a match between its mechaber and his sister, the daughter of Harav Shmaryahu Karelitz, Rav of Kosova.

After his chasunah, the Steipler taught in the yeshivos in Semiatitz and Pinsk. Then in 5694/1934, he immigrated to Eretz Yisrael with his brother-in-law, the Chazon Ish. At first, he taught in Yeshivas Novardok in Bnei Brak, but eventually dedicated himself to writing his sefarim, Kehillos Yaakov.

The Steipler’s devotion to Torah was remarkable. When his young son, Chaim, began to speak, the Steipler taught him the names of the mashechtos of Shas. Likewise, he taught him the names of many of the sefarim in his bookcase. Thus, when the mashgiach of the yeshivah stopped in to speak to the Steipler one day, and jokingly asked the one-and-a-half-year-old Chaim where the Midrash Rabba was, the child was able to point it out with no difficulty.

After the petirah of the Chazon Ish, the Steipler became his unofficial successor as manhig and posek.

In 1848, the dental chair was patented by M. Waldo Hanchett.

In 1947, India became independent from Britain and was divided into the countries of India and Pakistan after some 200 years of British rule.

In 1989, F.W. de Klerk was sworn in as acting president of South Africa, one day after P.W. Botha resigned as the result of a power struggle within the National Party.