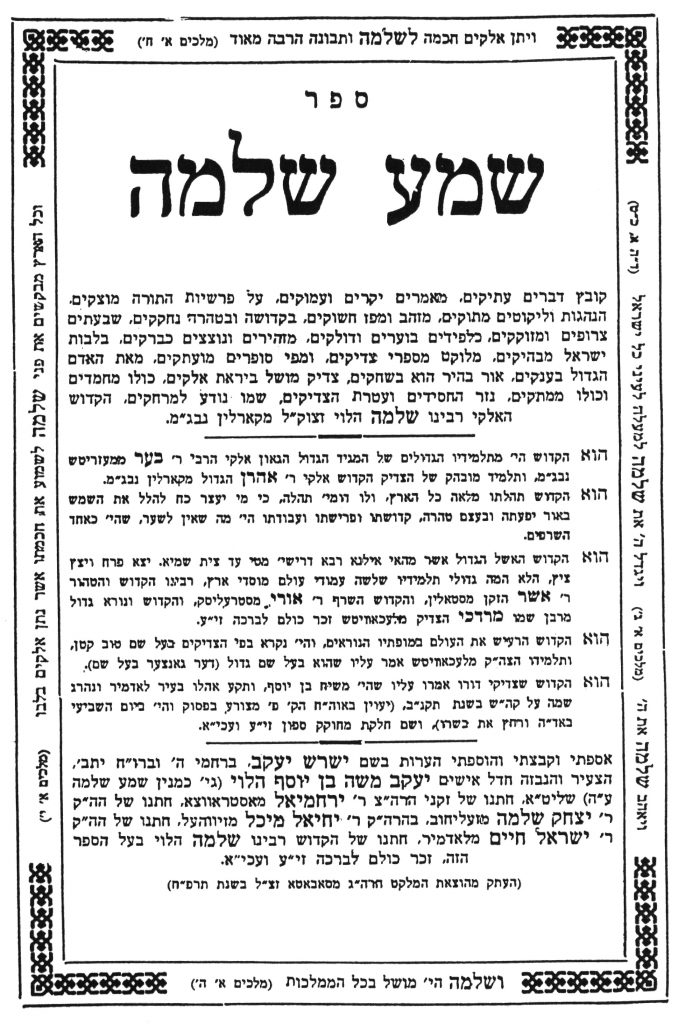 Harav Shlomo Halevi of Karlin was born in 5500/1740 to Harav Meir. Before his greatness was revealed, Harav Shlomo was an impoverished young Torah scholar with no source of financial support. He studied day and night in the beis medrash, toiling in his Divine service and Torah study.

He was a talmid and devoted yedid of Harav Aharon Hagadol of Karlin, zy”a, and after Rav Aharon’s passing in 5532/1772, Rav Shlomo took on the leadership of Karlin, which he maintained for 20 years.

Under his leadership, Lithuanian Chassidus thrived and expanded. The Rebbe emphasized the avodah of davening with hislahavus in order to maintain closeness to Hashem.

In his youth, he traveled, together with Rav Aharon, to the Rebbe Harav Dov Ber, the Maggid of Mezritch, zy”a. The Maggid attested that Rav Shlomo was destined for greatness and referred to his supreme level in kedushah as that of Moshiach ben Yosef.

The Baal HaTanya said of him, “Ehr iz ah tefach hecher fun di velt (He is a tefach higher than the world).”

Rav Shlomo’s talmid, Harav Mordechai of Lechovitch, zy”a, claimed that his Rebbe knew the language of the birds, the palm trees and the malachim — everything written in Sukkah 28b about Rabi Yochanan ben Zakkai.

(Using calculations he originated, he taught that it is permitted to recite Kiddush Levanah with the Shem haMalchus until 17 24-hour periods after the molad, and indeed, Reb Shlomo’s students and all the Rebbes of the Karlin dynasty did so.)

At the age of 52, Rav Shlomo moved to Ludmir, but he was not to live there long. A war was raging between Russia and Poland, and one Shabbos the Rebbe was shot al kiddush Hashem by a Cossack.

He lived until the following Wednesday, 22 Tammuz, when his pure soul left this world.

His yahrtzeit has the gematria of the passuk “Vayinatlem vayinasem kol yemei olam — He took them and carried them all the days of the universe.” He was buried in Ludmir.

In 5688/1928, Harav Yaakov Moshe Kleinbaum, Av Beis Din of Savala, published Shema Shlomo, divrei Torah and collected writings of Harav Shlomo of Karlin, which were printed in a number of editions.

In 5746/1986, it was reissued by Machon Zecher Naftali as Shema Shlomo Hashalem, in two volumes.