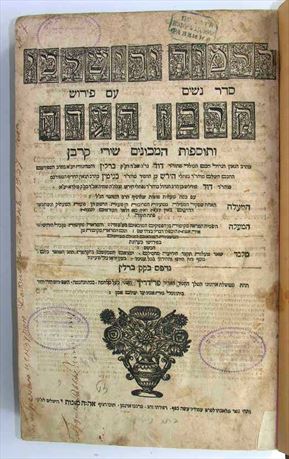 In 5416 /1656, the West India Company directors ordered Peter Stuyvesant to permit the Jews to trade and own real estate in New Amsterdam (which became New York).

Harav David Mirels (Frankel) was the son of Harav Naftali Hirsh. He was born in Berlin.

As an adult, Harav David first served as Rav in Dessau and then was appointed Rav of Berlin in 5502/1742.

He was known for his greatness in Torah as well as his wealth and was renowned for his works of tzedakah and chessed.

Harav David devoted himself to the study of Talmud Yerushalmi, which had been largely neglected. He gave it great impetus with his commentary, Korban Ha’edah. The Korban Ha’edah covers the sedarim of Moed, Nashim and Nezikin. It is found on the outer side of a gemara page.

His other notes on the Yerushalmi, found at the bottom of the page, called Shiyarei Korban, provide solutions to inaccuracies in the text.

The Avnei Nezer writes in the name of his father-in-law, the Kotzker Rebbe, that with the Korban Ha’edah one is able to understand the Yerushalmi.

In 1778, the Revolutionary War Battle of Monmouth took place in New Jersey; from this battle arose the legend of “Molly Pitcher,” a woman who was said to have carried water to colonial soldiers, then taken over firing her husband’s cannon when he became injured.

In 1940, President Roosevelt signed the Alien Registration Act, also known as the Smith Act, which required adult foreigners residing in the United States to be registered and fingerprinted.