This Day In History 22 Kislev/December 22

By Shaar blatt of Yosef Lekach 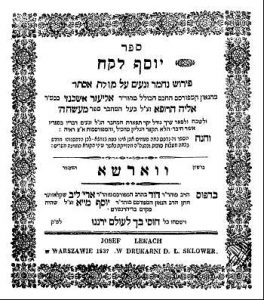 In 5118/1357, Charles IV issued letters of protection for the Jews of Strasbourg. Two years later, mobs burned 1,000 Jews, Hy”d, and forced many others to convert, R”l.

In 5383/1622, the king of Denmark invited Jews of Amsterdam to settle in Norway and enjoy religious freedom.

As a youth, Rav Eliezer learned in the yeshivah of Harav Yosef Taitazak in Salonika. Rav Yosef (the “MahaRITaTS”) was a Talmudic authority and mekubal.

Some say that from there, Rav Eliezer moved to Yerushalayim or Tzfas.

Rav Eliezer was known as a leading Rav in his time, even in the generation of the Beis Yosef, the Rema and the Maharal, to name just a few. He served as Rav in a wide array of kehillos, across the spectrum.

He became Rav in Egypt in 5299/1539, probably in Fostat, where he was soon widely known for his learning and his wealth. Compelled by circumstances to leave Egypt, he went to Cyprus, remaining there for two years as Rav at Famagusta.

Due to a machlokes with Harav Meir Padua, Rav Eliezer moved on to Cremona in northern Italy. There, he printed his first sefer, Yosef Lekach, on Megillas Esther, in 5336/1576. It was named for Don Yosef Nasi, the Jewish “duke” of Naxos.

Later he left Cremona and moved on to Poland, settling in Posen, where he was appointed Rav.

His sefarim include Maasei Hashem, a commentary on the historical portions of the Tanach, written for the instruction of his son Rav Eliyahu; it contains a complete commentary on the Haggadah, which has frequently been published separately.

In 1775, Esek Hopkins was appointed the commander-in-chief of the Continental Navy.

In 1937, the first, center tube of the Lincoln Tunnel connecting New York City and New Jersey beneath the Hudson River was opened to traffic. (The second tube opened in 1945; the third in 1957.)

In 1989, Romanian President Nicolae Ceausescu, the last of Eastern Europe’s hard-line Communist rulers, was toppled from power in a popular uprising.