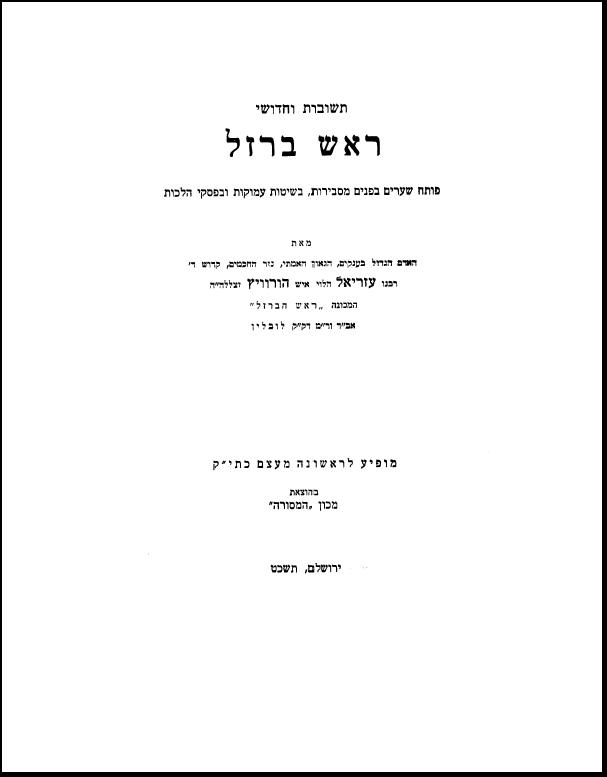 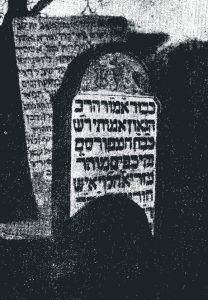 Harav Ezriel Halevi Horowitz was born in 5507/1747 in Zamutsch. His father was Harav Dov.

Zamutsch was famous for its many talmidei chachamim, but even there the young Ezriel shone, standing out for his sharp mind.

He married the daughter of Reb Binyamin Buska, a leading member of the Zamutsch kehillah.

Rav Ezriel’s first position as Rav was in Krashnick, a small town near Lublin. A few years later, about the year 5564/1804, he was appointed to the prestigious post of Rav of Lublin, where he remained to his last day.

Rav Ezriel had a warm heart, but he could also rule with an iron hand. He could not be bought off by the affluent with money; this trait was inscribed on his matzeivah: Neki kapayim — his hands were clean. With adequate parnassah, he was able to learn as well as rule the city, in ruchniyus and in gashmiyus.

He headed a large yeshivah in Lublin, and despite his many duties as Rav, he found time to deliver shiurim in the yeshivah.

Rav Ezriel was called the Rosh Barzel, or Eizener Kop. His chiddushim at times astounded those who heard them. His questions addressed to other Gedolim were often the talk of the Torah world.

Rav Ezriel was niftar on Shabbos, 22 Cheshvan 5579/1818, at the age of 62. He was buried in the Lublin cemetery near the kever of Harav Shalom Shachna of Lublin, zt”l, father-in-law of the Rema.

He was survived by two sons, Harav Dovid and Harav Efraim Fishel.

Sections of his writings were published as Teshuvos v’Chiddushei Rosh Barzel.

In 1969, the Nixon administration announced a halt to residential use of the pesticide DDT as part of a total phaseout.

In 1985, the first version of Microsoft’s Windows operating system, Windows 1.0, was officially released.

In 2000, lawyers for Al Gore and George W. Bush battled before the Florida Supreme Court over whether the presidential election recount should be allowed to continue.