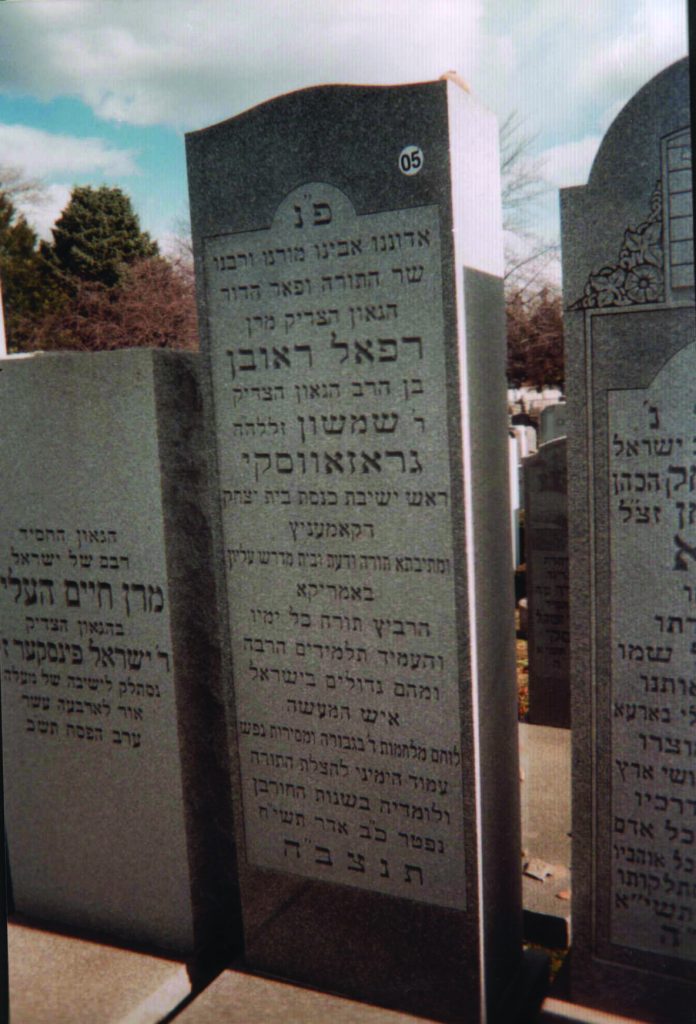 In 5693/1933, the infamous Dachau concentration camp was established in Germany. The camp, one of the first established by the Nazis, was originally designated as a prison camp for political criminals. After Kristallnacht, the number of Jews imprisoned there kept growing until over 200,000 victims passed through its gates, most of whom perished. The Nazis built a gas chamber in Dachau, but it was never used. This concentration camp was liberated in April 1945 by the U.S. army.

Harav Reuven Grozovsky (known as Reuven Minsker) was born in 5656/1896. His father, Harav Shamshon, was the leading Dayan of Minsk, Belarus.

He learned in Yeshivah Knesses Yisrael in Slabodka under Harav Moshe Mordechai Epstein and Harav Nosson Tzvi Finkel (the Alter of Slabodka).

When still young, Reb Reuven began his lifelong campaign to save bnei Torah from being drawn to the ideas of Zionism, Socialism, Marxism, etc., which were devastating to the yeshivos, and destructive to the spiritual essence of the ben Torah.

As a student in Slabodka, he recruited a number of bnei Torah from his hometown of Minsk to join him. One such recruit was Yankel Dolinover. Yankel became better known as Harav Yaakov Kamenetsky, zt”l. Another of Reb Reuven’s charges in Slabodka was the iluy Arke Sislovtzer. Arke became well known as Harav Aharon Kotler, zt”l, Rosh Yeshivah, Beis Medrash Govoha.

In 5679/1919, Reb Reuven became the son-in-law of Harav Baruch Ber Leibowitz, zt”l. He moved with him from the Vilna suburb of Lukishuk, where Reb Baruch Ber had maintained his yeshivah, to Kamenitz, where the yeshivah they led flourished until World War II. Reb Reuven eventually became the Rosh Yeshivah.

During World War II, Reb Reuven escaped the Holocaust with a group of his talmidim, landing on the West Coast of the United States in Seattle, Washington.

From there he went on to New York, where he joined Harav Aharon Kotler and Harav Avraham Kalmanowitz, zt”l, in the lobbying and fundraising efforts of the Vaad Hatzalah, aimed at saving Jews from the Nazis.

Six years before his passing, Reb Reuven suffered a stroke which impaired him physically. Nonetheless, he remained mentally alert and was able to learn until his petirah on 22 Adar 5718/1958, at the age of 62.

His shiurim were published under the name Chiddushei Reb Reuven. A selection of his shmuessen, Baayos Hazman, was also published.

In 1816, the U.S. Supreme Court affirmed its right to review state court decisions.

In 1987, the Food and Drug Administration approved the sale of AZT, a drug with life-prolonging properties.

In 1997, President Bill Clinton and Boris Yeltsin opened talks in Helsinki, Finland, on the issue of NATO expansion.