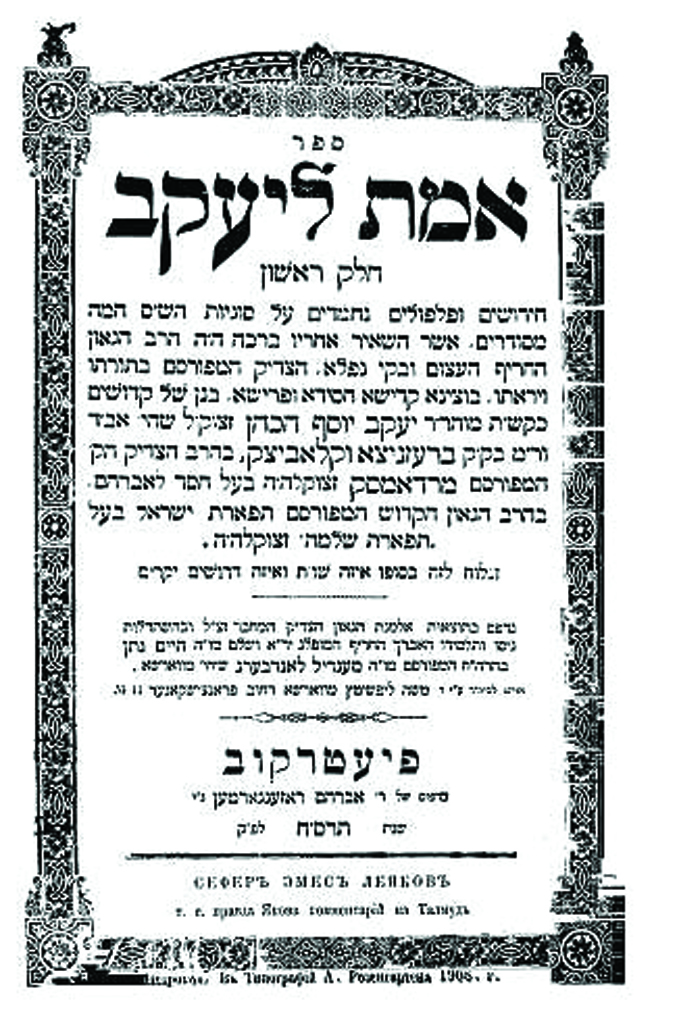 In 2449/1312 B.C.E., Bnei Yisrael received double portions of mann on Friday; Moshe Rabbeinu informed them of the holiness of Shabbos (Shemos 16:22).

In 5709/1949, Kfar Chabad, the Lubavitch village located five miles south of Tel Aviv, was founded by the Lubavitcher Rebbe Harav Yosef Yitzchak, zt”l. The first settlers were mostly recent immigrants from the Soviet Union, survivors of the terrors of World War II and Stalinist oppression.

Harav Yaakov Yosef was a son of the Chessed L’Avraham of Radomsk (son of the Tiferes Shlomo). Born in 5633/1873, he was the younger brother of the Knesses Yechezkel of Radomsk.

Despite obstacles, he served Hashem with mesirus nefesh. In his short life he served as Rav in two towns, Breznitza and Klobitzk.

His brother the Knesses Yechezkel, zt”l, wrote a lengthy hakdamah in Emes L’Yaakov about his mesirus nefesh for Torah and kedushah, and how the Gedolei Hador cherished him. Tzaddikim attested that he did not derive any pleasure from this world.

Unfortunately, Reb Yaakov Yosef was not maarich yamim; he was niftar at 29. His chiddushei Torah are printed in Emes L’Yaakov.

In 1542, Spanish explorer Hernando de Soto died while searching for gold along the Mississippi River.

In 1927, Charles A. Lindbergh landed his Spirit of St. Louis near Paris, completing the first solo airplane flight across the Atlantic Ocean in 33½ hours.

In 1932, Amelia Earhart became the first woman to fly solo across the Atlantic Ocean as she landed in Northern Ireland, about 15 hours after leaving Newfoundland.

In 1941, a German U-boat sank the American merchant steamship SS Robin Moor in the South Atlantic after the ship’s passengers and crew were allowed to board lifeboats.

In 1956, the United States exploded the first airborne hydrogen bomb over Bikini Atoll in the Pacific.

In 1982, during the Falklands War, British amphibious forces landed on the beach at San Carlos Bay.

In 1991, former Indian Prime Minister Rajiv Gandhi was assassinated during national elections by a suicide bomber.