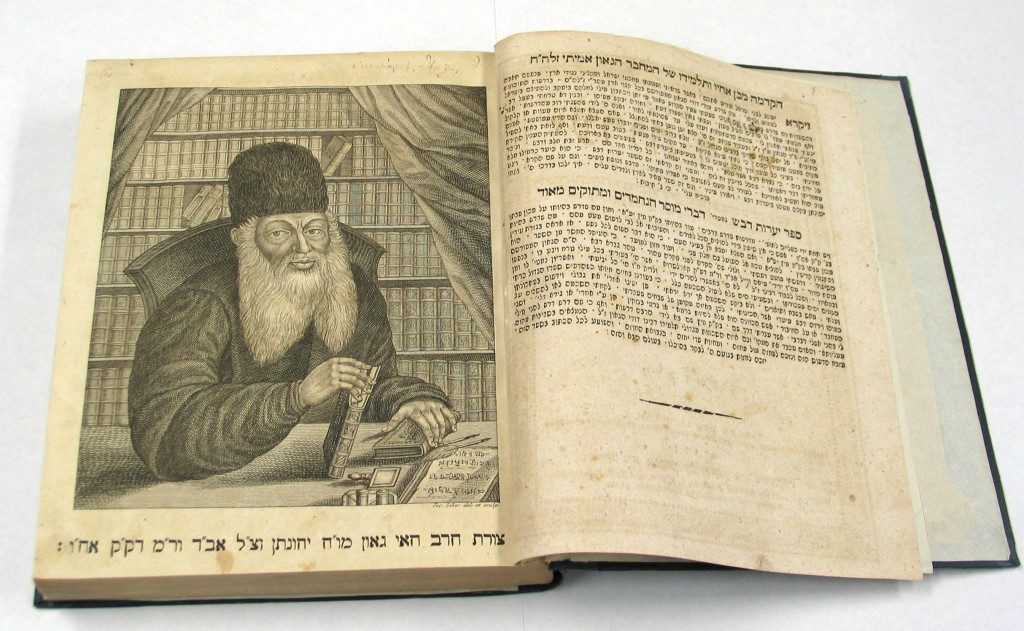 In 5699/1939, German forces occupied the town of Piotrokow with an estimated Jewish population of 18,000. The first ghetto in Poland was established there.

Harav Yonoson Eibeschutz was born approximately 5454/1694, in Pintshov. His father, Harav Nosson Nota, was a descendant of the Megaleh Amukos, and was the son-in-law of Harav Yehuda Leib Tzintz. Rav Yonoson was orphaned from both parents at a young age, as he attests in the hakdamah to his sefer, Kreisi U’pleisi, that his father was niftar before he had a chance to learn Torah from him.

In his younger years, Rav Yonoson learned under Harav Meir Eisenstadt, zt”l, the Panim Meiros, and afterwards under his great-uncle, Harav Eliezer Halevi Itinga, zt”l, in the city Shidlovtza.

He married the daughter of Harav Moshe Yitzchak Shapiro, zt”l, Rav of Bomsola. After his wedding they lived in his father-in-law’s home. Subsequently he moved to Prague, living with a great-uncle, Harav Aharon Yechiel Mechel Shapiro.

In Prague Rav Yonoson spent much time learning in the beis medrash of Harav Avaham Broide, zt”l, of whom he always considered himself a talmid. Two years later Rav Yonoson left Prague, traveling to Hamburg, to reside in the home of his mother-in-law’s father, Rav Mordechai Cohen. In 5474/1714, Rav Yonoson returned and was appointed Rosh Yeshivah and darshan of the city. In 5497/1736, when Harav David Oppenheim was niftar, Rav Yonoson became the Rav of Prague.

Since there was no printing press in Metz Rav Yonoson wanted to leave the city in order to publish his chiddushim. That became possible only much later when he was invited to become Rav in the kehillos of Altona, Hamburg and Wandsbeck, in place of Harav Yechezkel Katzenelenboigen, zt”l, author of Knesses Yechezkel.

He felt it was imperative to transmit Torah to future generations. Wherever he was Rav, his first priority was establish a yeshivah.

Shortly before his petirah, he published his Kreisi U’pleisi on Yoreh Deiah. Many of his talmidim had written down the shiurim for themselves according to their understanding; to rectify any misunderstanding Rav Yonoson edited his talmidim’s notes and had them published in one sefer. This was the only one published in his lifetime; all his other works were published posthumously.

After his petirah his sefarim, Ahavas Yonoson on the haftoros; Urim V’tumim on Choshen Mishpat; Yaaros Dvash, his drashos and mussar; Keshes Yonoson, his pilpulim; Binah Leitim, on Rambam Hilchos Yom Tov; and Bnei Ahuvah on the Rambam and Shulchan Aruch Even Haezer were published.

In 1814, the Battle of North Point took place in Maryland during the War of 1812 as American forces slowed British troops advancing on Baltimore.

In 1938, Adolf Hitler demanded the right of self-determination for the Sudeten Germans in Czechoslovakia.

In 1942, during World War II, a German U-boat off West Africa torpedoed the RMS Laconia, which was carrying Italian prisoners of war, British soldiers and civilians; it’s estimated that more than 1,600 people died while some 1,100 survived after the ship sank. The German crew, joined by other U-boats, began rescue operations. (On September 16, the rescue effort came to an abrupt halt when the Germans were attacked by a U.S. Army bomber; as a result, U-boat commanders were ordered to no longer rescue civilian survivors of submarine attacks.)