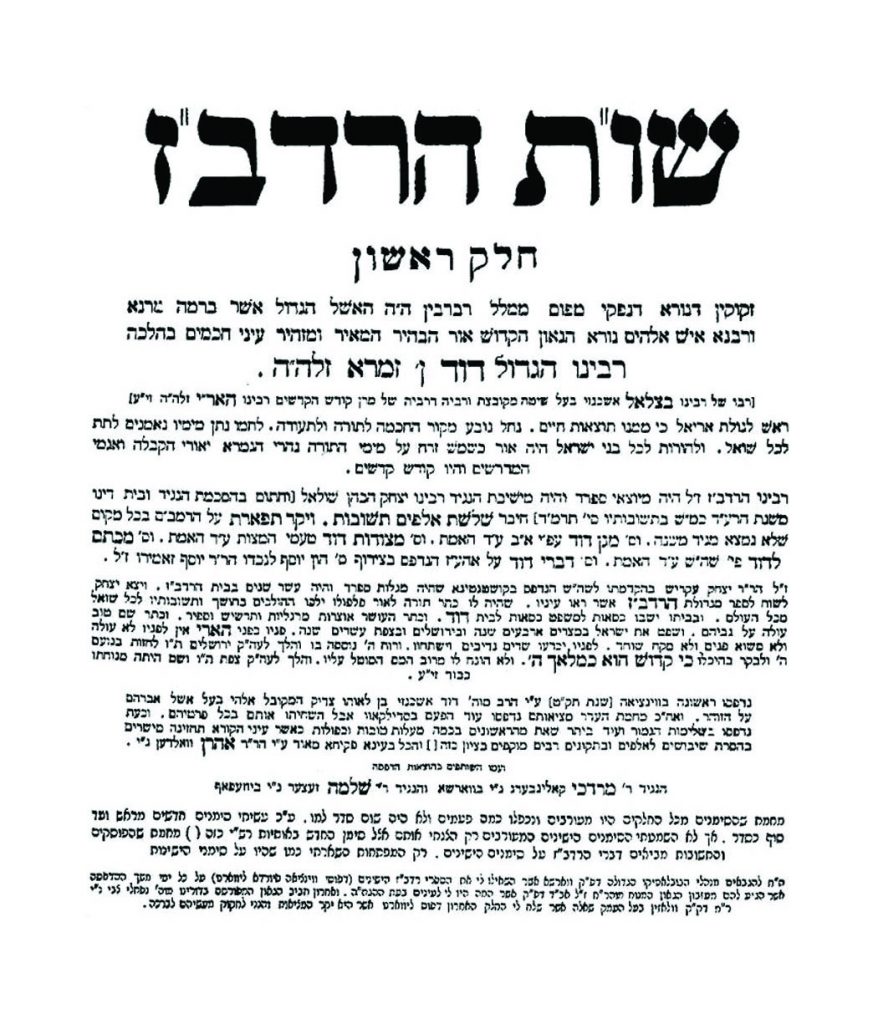 5404/1643, Harav Avraham Azulai, zt”l, the Chessed L’Avraham, the great-great-grandfather of the Chida (according to some, his yahrtzeit is on 24 Cheshvan)

Rabbeinu David ben Zimra, the Radbaz, was born in 5240/1480. (Others say he was born in 5230/1470.) He was a talmid of Rabbeinu Yosef of Saragosa, zt”l, and a chaver of the Mahari Korkos, zt”l. He arrived as a child with his father in Tzfas after the Spanish expulsion.

In 5274/1514, he immigrated to Egypt and joined the yeshivah of the naggid Rabbi Yitzchak Hakohen Sholal. There he began his career as a marbitz Torah. For over 40 years he taught many talmidim, among them great luminaries such as Harav Betzalel Ashkenazi (the Shittah Mekubetzes) and the Ari Hakadosh, among others.

Subsequently, he was appointed Chief Rabbi of Egypt. His income, however, came through business, from which he became quite wealthy.

The period in which he was Rav was a period of relative tranquility, and his yeshivah thrived. The Radbaz instituted many takanos in the community, which he led with wisdom and compassion.

Harav Yitzchak ibn Ekrish, one of those who were expelled from Spain, records that after a long period of wandering he found shelter in the home of the Radbaz for over 10 years. During that time he taught the Radbaz’s children, and when the Radbaz returned to Eretz Yisrael he went along with him. In his writings he describes the greatness of his master.

After many years, he returned to Eretz Yisrael and settled in Yerushalayim. However, due to his vast wealth, the Arabs demanded heavy taxes from him, so he was forced to move to Tzfas. He was accepted with open arms by that exalted community, especially by the Beis Yosef, who bestowed great honor upon him.

The Radbaz’s holiness was extraordinary. In Shem Hagedolim, the Chida cites elder Rabbanim of Yerushalayim who attested that the Radbaz experienced gilui Eliyahu.

As one of the elder Torah luminaries in Tzfas, he was asked to lead the esteemed kehillah, which he did until his petirah. He was niftar on 21 Cheshvan and was buried in Tzfas; the exact location of his kever is unknown; it is believed to be in the me’arah of the Alshich.

The Radbaz was a marbitz Torah on a grand scale. He wrote over 3,000 teshuvos, including 70 “Teshuvos min Hashamayim” that he said had been transmitted to him from On High, which were collected in Sifrei Radbaz. His sefarim also include Yekar Tiferes, Keser Malchus, Metzudas David and two sifrei Kabbalah, Michtav LeDavid and Magen David.

In 1893, the U.S. Senate gave final approval to repeal the Sherman Silver Purchase Act of 1890.

In 1894, the time clock was patented by Daniel M. Cooper of Rochester, NY.

In 1945, the U.S. government announced the end of shoe rationing.

In 1961, the Soviet Union tested a hydrogen bomb, the “Tsar Bomba,” with a force estimated at about 50 megatons.

In 1995, by a razor-thin vote of 50.6 percent to 49.4 percent, Federalists prevailed over separatists in a Quebec secession referendum.