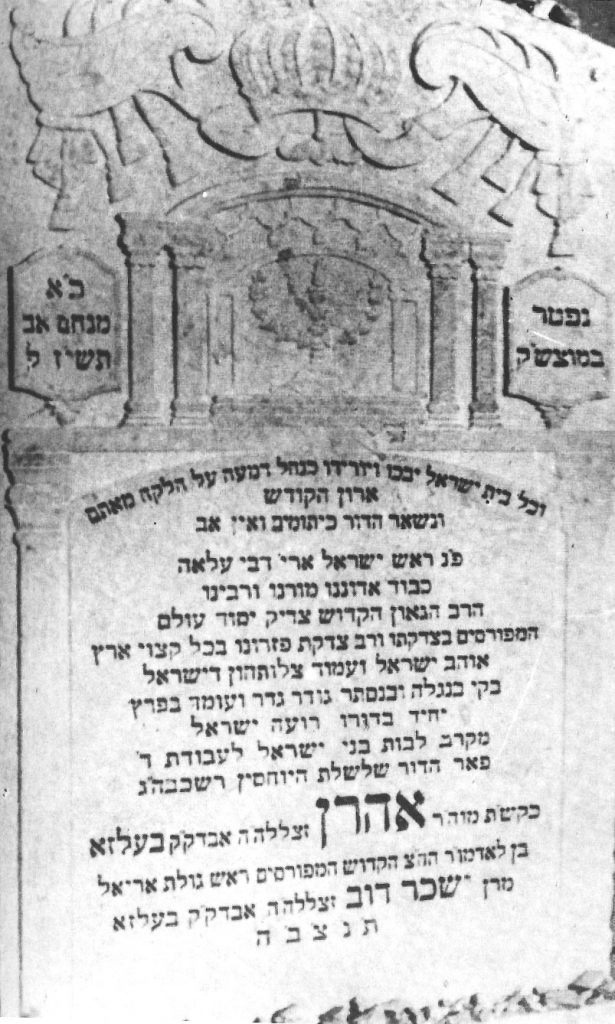 In 5694/1934, the Reichstag assured that the power of Adolf Hitler, ym”s, would be entrenched when it appointed him head of state and commander-in-chief of the German armed forces.

Rav Aharon’s glorious future as fourth Belzer Rebbe was apparent even during his youth, when his humility and piety were evident. After his father’s petirah in 5687/1927, he succeeded him as Rebbe. He was an inspiration in Torah and avodah to thousands of Chassidim, as well as to the hundreds of talmidim who learned year-round in his beis medrash.

In Elul of 5699/1939, during the worst of the battles on Polish soil, Belz was an island of quiet. The Poles had retreated and the Germans were busy elsewhere.

When one part of Poland fell to the Germans, the people of Belz were, for a short while, left alone. A local militia, manned by more Jews than Poles, in proportion to their numbers in the town, kept order and assisted the thousands of refugees who began arriving due to the relative peace in that region.

The Rebbe acquired a horse and carriage to be kept ready so that he could flee at a moment’s notice.

Even in such tense times, the Rebbe’s concern was for the finest details of the halachah. Every evening, when his gabbai brought him his coffee for “breakfast” (his first meal of the day), the Rebbe asked him if had fed the horses, in accordance with the halachah to feed one’s animals before oneself.

Eventually, Rav Aharon fled with his family to Premishlan, where all were killed except for the Rebbe and his brother, Harav Mordechai of Bilgoray, zt”l, father of the current Belzer Rebbe, shlita. Afterward, Rav Aharon hid in the Bochnia ghetto near Cracow before escaping with Rav Mordechai to Budapest.

Budapest did not prove to be a refuge either, and the pair fled to Eretz Yisrael, where efforts began to rebuild the devastated court of Belz.

Rav Aharon established a beis medrash in Tel Aviv that became a source of life for the olam haChassidus in Eretz Yisrael. Rav Aharon was cherished as a torch rescued from the blaze of Churban Europa, a beacon of kedushah and avodas Hashem during those trying times.

In Eretz Yisrael, Rav Aharon reluctantly took a role in communal affairs, his love of Klal Yisrael overcoming his deep humility and distaste for the public eye. He founded the Belzer Yeshivah in Yerushalayim.

The Rebbe was known as a great po’el yeshuos, and many people merited yeshuos through his brachos.

Rav Aharon spent summers in Yerushalayim and was niftar there on 21 Av 5717/1957. Tens of thousands attended his levayah, and he was mourned by all of Klal Yisrael.

In 1610, during his fourth voyage to the Western Hemisphere, English explorer Henry Hudson sailed into what is now known as Hudson Bay.

In 1776, members of the Second Continental Congress began attaching their signatures to the Declaration of Independence.

In 1964, the Pentagon reported the first of two attacks on U.S. destroyers by North Vietnamese torpedo boats in the Gulf of Tonkin.