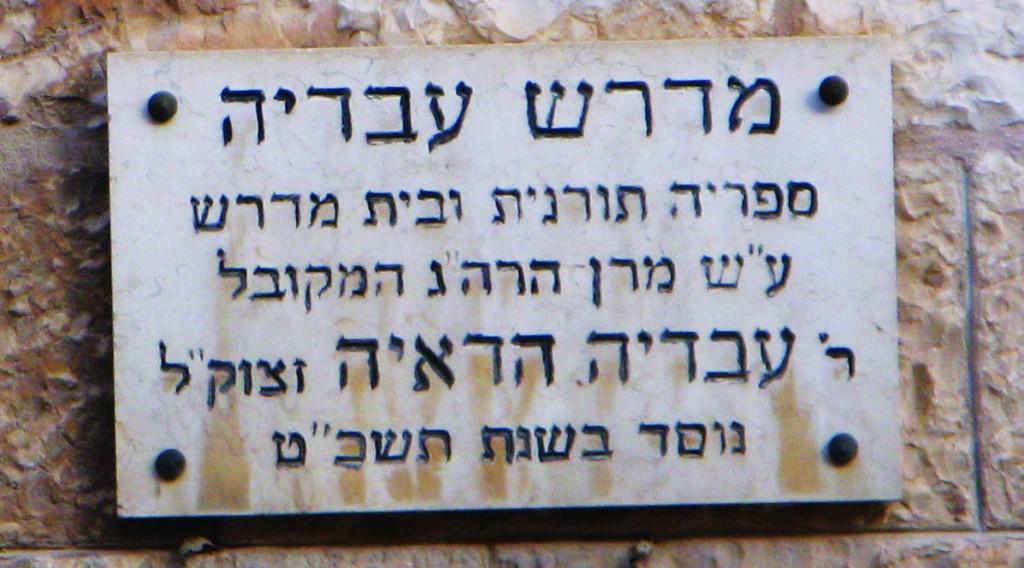 Harav Ovadyah Hadayah was born in Aleppo, Syria, in Teves 5650/1890. His father, Harav Shalom, was a descendant of a famed family of Rabbanim of Aleppo.

The family moved to Eretz Yisrael and settled in Yerushalayim. Rav Ovadyah learned in Talmud Torah Doresh Tzion and later in Yeshivos Chessed L’Avraham and Tiferes Yerushalayim. He was blessed with a phenomenal memory.

When Yeshivat Porat Yosef was founded in Yerushalayim’s Old City in 5683/1923, Rav Ovadyah served as one of the Roshei Yeshivah. A part of the yeshivah was Yeshivat Oz V’hadar, for learning Kabbalah. Rav Ovadyah was shliach tzibbur in the yeshivah, leading the tefillos according to the kabbalistic lessons of the Arizal.

He was Rosh Yeshivah of Yeshivat Beit El (kabbalah) for 30 years.

Rav Ovadyah is best known for his eight-volume She’eilos U’teshuvos Yaskil Avdi. Seven volumes were published in his lifetime, the eighth volume posthumously.

Rav Ovadyah was niftar on Shabbos afternoon, 20 Shevat 5769/1929, while learning at home, after having received the aliyah of the Aseres Hadibros. His life ended as he grasped a sefer.

In 1793, France’s King Louis XVI, condemned for treason, was executed by guillotine.

In 1861, the future president of the U.S. Confederacy, Jefferson Davis of Mississippi, and four other Southerners resigned from the U.S. Senate.

In 1908, New York City women were prohibited from smoking in public.

In 1942, German forces launched a new offensive in the western African desert in World War II.

In 1945, the Brazilian Expeditionary Force led an allied attack on Monte Castelo in Italy; this constituted the only participation of South American troops in World War II.

In 1954, the first atomic submarine, the USS Nautilus, was launched at Groton, Connecticut.

In 1968, 31 North Korean commandos attempted to attack South Korea’s presidential palace. All but one died in gunfights; 34 South Koreans were killed.

In 1970, France’s sale of Mirage jets to Libya was announced.

In 1976, the supersonic Concorde jet was put into service by Britain and France.

In 1986, a car packed with explosives blew up near the office of President Amin Gemayel’s Phalange Party in east Beirut, Lebanon, killing 22 people and wounding 102.

In 1990, East Germany’s Communist Party expelled Egon Krenz, the leader who oversaw the opening of the Berlin Wall.

In 1992, the U.N. Security Council urged Libya to surrender two agents indicted by the United States in the bombing of Pan Am Flight 103.

In 1993, a supertanker carrying 296 million liters (78 million gallons) of crude oil burned and leaked oil after slamming into another ship off Indonesia’s northern tip.