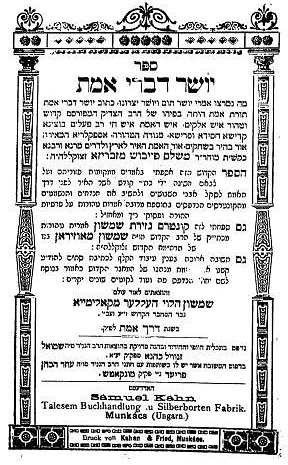 In 5488/1727, Jews of New York were allowed to take an official oath without reference to Christianity.

In 5704/1943, Hitler’s soldiers were chased out of Casablanca, prompting the celebration of “Purim of Casablanca.”

He learned Torah and chassidus under the Maggid of Mezeritch, Harav Menachem Mendel of Premishlan and Harav Yechiel Michel of Zlotchov, zechusam yagein aleinu, all of whom he quotes in his sefer.

Rav Meshulam Feivish is best known for his classic Chassidic work, Yosher Divrei Emes. It consists of two kuntreisim, the first written in 5537/1777 and the second, Kuntres Derech Emes, written after 5541/1781. (We know this because the Zlotchover Maggid was niftar on 25 Elul 5541/1781, and the kuntres mentions that he was already deceased.) Some of his drashos were also published in the sefer Likutim Yekarim.

A Rebbe and Chassidic leader, Rav Meshulam Feivish was also renowned for his knowledge of Shas and Poskim. Unfortunately, not many of his halachic rulings have survived. Rav Meshulam Feivish had a unique mehudar sefer Torah that is quoted by the sefer Mishnas Avraham on hilchos Stam as a source and proof for certain halachos in tzuras ha’osiyos, the forms and shapes of the letters.

Rav Meshulam Feivish had many talmidim. Some of the more famous include Harav Dovid Shlomo Eibshitz, the Arvei Nachal; Harav Yosef Dovid Hakohen, Rav in Zhvaliv and Yassi and mechaber of Derech Emunah; Harav Menachem Mendel of Kossov-Vizhnitz; and Harav Chaim of Tchernowitz, the Be’er Mayim Chaim, who is considered a talmid chaver, zechusam yagein aleinu.

After Rav Meshulam Feivish’s petirah, most of his followers flocked to the court of his close talmid, Harav Menachem Mendel of Kossov, founder of the Vizhnitz dynasty.

In 1910, the Mexican Revolution of 1910 had its beginnings under the Plan of San Luis Potosi issued by Francisco I. Madero.

In 1959, the United Nations issued its Declaration of the Rights of the Child.

In 1967, the U.S. Census Bureau’s Population Clock at the Commerce Department ticked past 200 million.

In 1969, the Nixon administration announced a halt to residential use of the pesticide DDT as part of a total phase-out.

In 1969, a group of American Indian activists began a 19-month occupation of Alcatraz Island in San Francisco Bay.