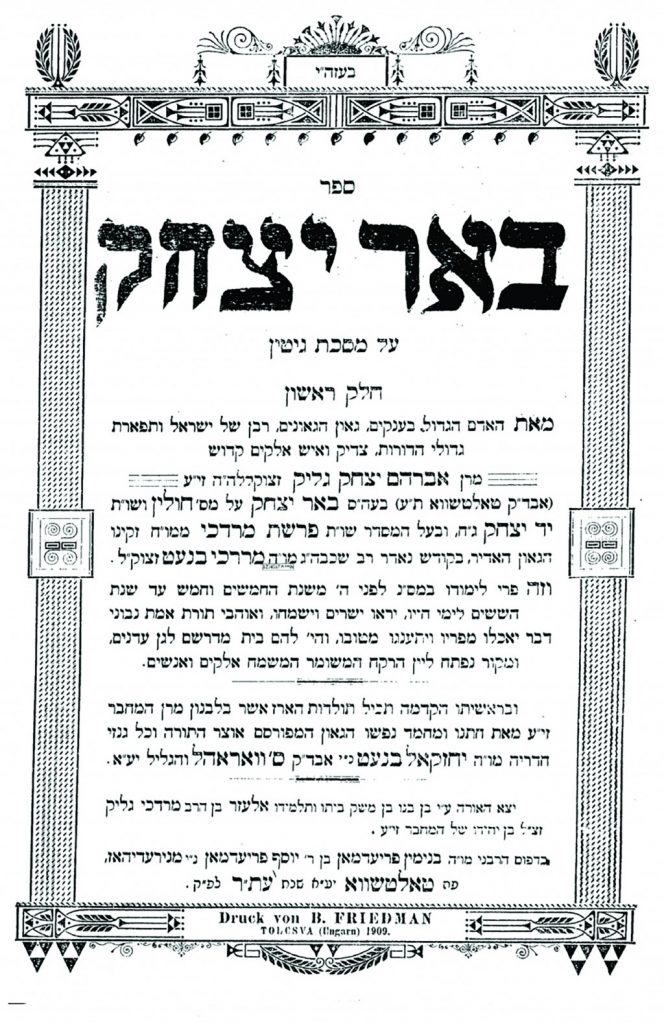 Harav Avraham Yitzchak Glick was born in 5586/1826 in the village of Wieretsh near Debrecen, Hungary.

Because their previous children had died young, when this son was born his father, Rav Shammai, and his mother undertook to fast every Monday and Thursday so that Hashem should grant him long life and he should grow up to be a yerei Shamayim and a lamdan.

In 5606/1846, when Reb Avraham Yitzchak was already known as a talmid chacham and lamdan, he was taken as a chassan by Harav Yeshayah Binet of Kalev, son of Harav Mordechai Binet of Nikolsburg. For the next three years Reb Avraham Yitzchak lived in the home of his father-in-law, dedicating himself totally to the study of Torah.

Many kehillos asked Reb Avraham Yitzchak to serve as their Rav, but he declined. He owned a few buildings that his father-in-law had given him, so he was able to support his family without having to become a Rav.

A few years later, though, a fire devastated all his properties — even the house he lived in. He lost everything and was forced to enter the rabbanus. He took the position of Rav of Toltchova, where he also headed a yeshivah. He was Rav there for nearly 50 years.

In 1788, Maryland became the seventh state to ratify the Constitution of the United States.

In 1925, the International Exposition of Modern Industrial and Decorative Arts, which gave rise to the term “Art Deco,” began a six-month run in Paris.

In 1947, a six-man expedition set out from Peru aboard a balsa wood raft named the Kon-Tiki on a 101-day journey across the Pacific Ocean to the Polynesian Islands.

In 2001, a Russian rocket lifted off from Central Asia bearing the first space tourist, California businessman Dennis Tito, and two cosmonauts on a journey to the international space station.