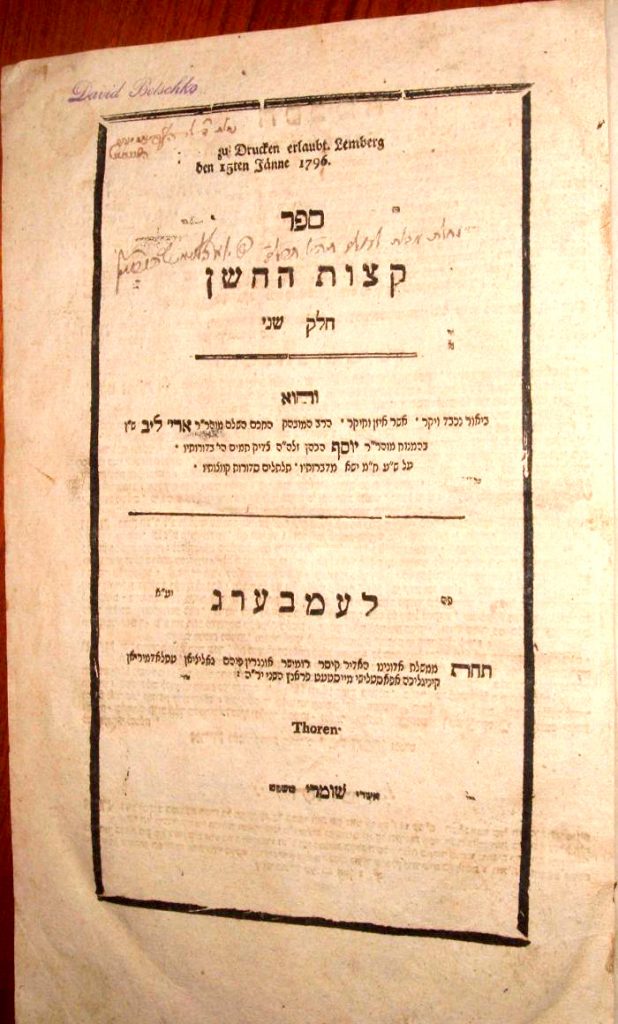 In 5398/1637, the Catholic Church in Recife, Brazil, closed the two existing shuls there.

Harav Aryeh Leib Heller, the Ketzos Hachoshen, was born in 5505/1745 in Kalisch. His father, Reb Yosef, was a grandson of the Tosfos Yom Tov.

In his youth, Reb Aryeh Leib was sent to learn in the yeshivah of Harav Meshulam Igra of Tysmienica, Poland. It was in those years that he wrote Shev Shmatsa.

After his marriage, Reb Aryeh Leib devoted himself to learning while being supported by his younger brother. However, when his brother lost his fortune, Reb Aryeh Leib was forced to take a rabbinic position.

The townspeople of Rozniatow, near Zidichov, invited Reb Aryeh Leib to be their Rav. The community was small and poor, and it could not sustain the Rav at the level he deserved. But he was able to dedicate himself to his studies without interruption. It was during his years there that he compiled his sefer Ketzos Hachoshen.

The first volume of Ketzos Hachoshen was published in Lvov. Due to his difficult circumstances, Rav Aryeh Leib was not able to publish the second volume himself. His grandson Reb Asher Mordechai published it in Lvov in 5586/1826.

In 5548/1788 Reb Aryeh Leib was appointed Rav in Stry, a post he held until his petirah in 5573/1813. He set up a yeshivah, disseminating Torah to multitudes of talmidim.

From his position in Stry, his fame spread among the Gedolim of the era; many complex she’eilos were sent to Reb Aryeh Leib.

Reb Aryeh Leib wrote three major works, but is best known for his monumental Ketzos Hachoshen. The Ketzos is a deep and profound work, which explains difficult passages in Choshen Mishpat with novel ideas proposed by Reb Aryeh Leib. Familiarity with this sefer is considered mandatory for any talmid chacham or Dayan. It has since become fundamental to understanding many sugyos in Shas, not just in Shulchan Aruch.

His sefer on Even Haezer, Avnei Miluim, was written in his later years and printed only after his petirah, unlike his other sefarim that were published, at least in part, during his lifetime.

In 1917, Denmark ceded the Virgin Islands to the United States for $25 million.

In 1945, Soviet and Polish forces liberated Warsaw during World War II; Swedish diplomat Raoul Wallenberg, credited with saving tens of thousands of Jews, disappeared in Hungary while in Soviet custody.

In 1946, the United Nations Security Council held its first meeting — in London.

In 1997, a court in Ireland granted the first divorce in the Roman Catholic country’s history.