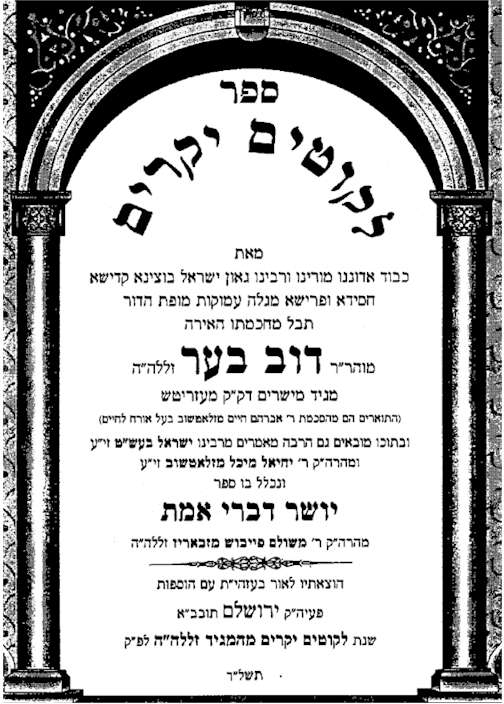 In 5559/1798, Harav Schneur Zalman of Liadi, the Baal Hatanya, was released from imprisonment in the Peter-Paul fortress in Petersburg, where he had been held for 53 days on charges that his teachings threatened the imperial authority of the Czar.

The son of Harav Avraham, Harav Dov Ber was born around 5464/1704 in the town of Lukatch. His lineage can be traced back to Dovid Hamelech. It is told that when Reb Dov Ber was five years old, his home was destroyed by fire. His mother stood by the charred remains and wept bitterly.

“It is not for the house that I weep,” she explained to the child, “but for the records of our yichus that have been consumed by flames.”

The young child comforted her. “The yichus will start again from me,” he said.

A brilliant student, he went to Lvov to learn under the great Pnei Yehoshua and under his son-in-law, Harav Shlomo Dov Ber of Lukatch. In 5512/1752 he became a talmid of the Baal Shem Tov, eventually succeeding him. He was known to be a great gaon, a truly astounding Torah scholar.

At first he earned a livelihood by teaching children; eventually he became a maggid in various towns, including Turtchin, Koritz, Dubna and later Mezeritch.

Reportedly, the first time the Maggid met the Baal Shem Tov was when he traveled to him to obtain a brachah for a refuah. Indeed, the Baal Shem Tov’s brachah helped, and it resulted in Rav Dov Ber becoming one of his closest talmidim.

After the the Baal Shem Tov’s petirah, Rav Dov Ber was recognized as his successor.

The Maggid of Mezeritch, often referred to as “Hamaggid Hagadol,” established his court in Mezeritch and expanded the movement of Chassidus. The Maggid was niftar on 19 Kislev 5533/1772 and was buried in Anipoli.

In 1901, the U.S. Army War College was established in Washington, D.C.

In 1942, during World War II, the Vichy French navy scuttled its ships and submarines in Toulon to keep them out of the hands of German troops.

In 1945, General George C. Marshall was named special U.S. envoy to China by President Harry S. Truman to try to end hostilities between the Nationalists and the Communists.