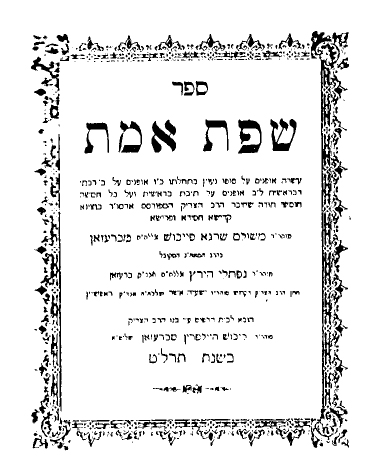 In 4949/1189, Rabbeinu Yaakov of Orleans, one of the Baalei Tosafos and a disciple of Rabbeinu Tam, was killed along with many other Jews in London during anti-Semitic riots inspired by King Richard’s coronation. Hy”d.

Harav Meshulam Shraga Feivish was born around 5570/1810. His father, Harav Naftali Hertz, zt”l, was Rav in Brezhan and one of the inner group of Chassidim of the Chozeh of Lublin.

After the petirah of his father in 5605/1845, the Rabbanus of the city of Brezhan was offered to him as part of the yerushah, but the members of the city and its leaders who were misnagdim refused to have him serve as their Rav.

Rav Meshulam Shraga Feivish was very close with his father-in-law from his second zivug, Harav Asher Yeshaya of Ropshitz. It was noted in the hakdamah of his sefer, Sfas Emes, by his son Reb Leibish, that Rav Asher Yeshaya gave his son-in-law the tefillin he had received from his own father-in-law, Harav Naftali Tzvi of Ropshitz. The tefillin had been given with instructions to pass them on to his son-in-law (since he only had one daughter). When his daughter married Rav Meshulam Shraga Feivish he passed on the tefillin.

When Harav David of Tolna, zy”a, who lived in Russia, resided in Brod, Rav Meshulam Shraga Feivish sent him a contingent of his Chassidim to be with him and learn from his ways. On Motzoei Shabbos Parashas Ki Savo 5734/1874, as soon as Shabbos was over, Rav David told the visitors to return to Brezhan because their Rebbe had been niftar over Shabbos.

This was intriguing, since these two Rebbes had never even met. Even more remarkable about the relationship between the two: When Reb Leibish came to Reb David to ask him for a haskamah on the sefer Sfas Emes, written by his father, Rav David responded enthusiastically, saying that he was acquainted with the mechaber, Rav Meshulam Shraga Feivish.

In 1796, President George Washington’s farewell address was published. In it, he advised, “Observe good faith and justice toward all nations. Cultivate peace and harmony with all.”

In 1982, the smiley emoticon was invented by Carnegie Mellon University professor Scott E. Fahlman, who suggested punctuating humorously intended computer messages with a colon followed by a hyphen and a parenthesis as a horizontal “smiley face, i.e. — 🙂

In 1985, the Mexico City area was struck by a devastating earthquake that killed at least 9,500 people.

In 1995, The New York Times and The Washington Post published the manifesto of Unabomber Ted Kaczynski, which proved instrumental in identifying and capturing him.

In 2008, struggling to stave off financial catastrophe, the Bush administration laid out a radical bailout plan calling for a takeover of a half-trillion dollars or more in worthless mortgages and other bad debt held by tottering institutions.