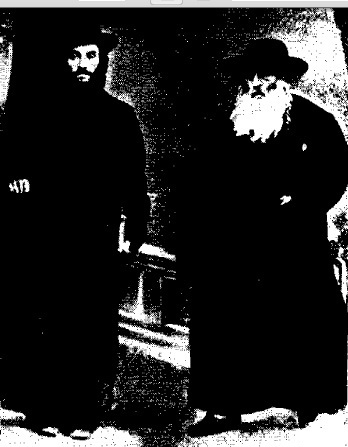 In 5699/1939, three riverboats, with 1,210 Jewish refugees from Vienna and Prague aboard, were stopped on the Danube near the Iron Gates gorge and the town of Kladovo on the Romanian-Yugoslavian border. The British government had protested to the Yugoslavian government the intention of the refugees to get to Eretz Yisrael. Two hundred children received travel permits; the rest were turned back.

In 5707/1947, two ships loaded with Jewish Holocaust survivors were stopped by the British; their passengers were taken to Cyprus. Only two years later — to the day — did the British announce their intention to release the Cyprus internees.

Harav Chaim Shmuel Halevi Horowitz was the son of Harav Eliezer. He was born in Neustadt in 5603/1843, and was descended from the Chozeh of Lublin.

Orphaned of his father at a young age, he was brought up by his grandfather, Harav Yosef Baruch, the “Gutte Yid” of Neustadt, son of the Ma’or V’shemesh.

From his youth, Reb Chaim Shmuel was noted for his outstanding hasmadah; he spent most hours of the day learning.

Reb Chaim Shmuel was the founder of the Chentchin dynasty, named for a small city near Kielce (Keltz), Poland. He was famed for his yeshuos and ruach hakodesh, and many would travel to his grand court.

Reb Chaim Shmuel was distinguished for his sharp mind and lamdanus. He would finish the entire Shas every year, as well as all four sections of the Shulchan Aruch.

Reb Chaim Shmuel was known for his love of Eretz Yisrael, and would make Kiddush on wine from Eretz Yisrael. He would also send sums of tzedakah money for the poor of the Land.

With the outbreak of World War I, the local Jews were forced to evacuate their properties and to leave Chentchin. Reb Chaim Shmuel and his Chassidim moved to nearby Kielce; he was niftar there during the war on 18 Teves 5676/1916.

His sons were Harav Eliezer, Harav Shalom and Harav Yehoshua Heshel — all of whom were appointed Rebbes.

In 27 B.C.E., Caesar Augustus was declared the first Emperor of the Roman Empire by the Senate.

In 1547, Ivan IV of Russia (popularly known as “Ivan the Terrible”) was crowned Czar.

In 1865, Union Maj. Gen. William T. Sherman decreed that 400,000 acres of land in the South would be divided into 40-acre lots and given to former slaves. (The order, later revoked by President Andrew Johnson, is believed to have inspired the expression, “Forty acres and a mule.”)

In 1967, Alan S. Boyd was sworn in as the first U.S. secretary of transportation.