In 3620, Shimon the Chashmonai was appointed Kohen Gadol and governor of the Jews, marking the beginning of the Chashmona’im dynasty that lasted 206 years, until the destruction of the Second Beis Hamikdash. 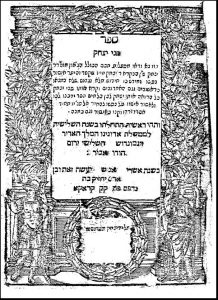 Harav Yitzchak Chayus, the son of Rav Avraham, was one of the leading poskim of his time.

He served as Rav in the cities Prostitz, Lvov, Krakow and finally Prague. He settled in Prague in 5344/1584.

His sefer Pnei Yitzchak, a halachic work, includes a compilation of all the halachos in Yoreh Deah in rhyme form, called Api Ravravi, by which name Rav Yitzchak is known. He also wrote Kiryas Arba.

Rav Yitzchak was niftar on 18 Elul 5373/1613. His three sons were all talmidei chachamim of note: Harav Avraham, zt”l, mechaber of Holech Tamim; Harav Eliezer, zt”l, the grandfather of the Beis HaLevi; and Harav Menachem Munish, zt”l.

In 1793, President George Washington laid the cornerstone of the U.S. Capitol.

In 1850, Congress passed the Fugitive Slave Act, which created a force of federal commissioners charged with returning escaped slaves to their owners.

In 1947, the National Security Act, which created a National Military Establishment and the position of Secretary of Defense, went into effect.

In 1959, during his U.S. tour, Soviet leader Nikita Khrushchev visited Wall Street, the Empire State Building and the grave of President Franklin D. Roosevelt; in a speech to the U.N. General Assembly, Khrushchev called on all countries to disarm.

In 1975, newspaper heiress Patricia Hearst was captured by the FBI in San Francisco, 19 months after being kidnapped by the Symbionese Liberation Army.

In 2014, voters in Scotland rejected independence, opting to remain part of the United Kingdom in a historic referendum.