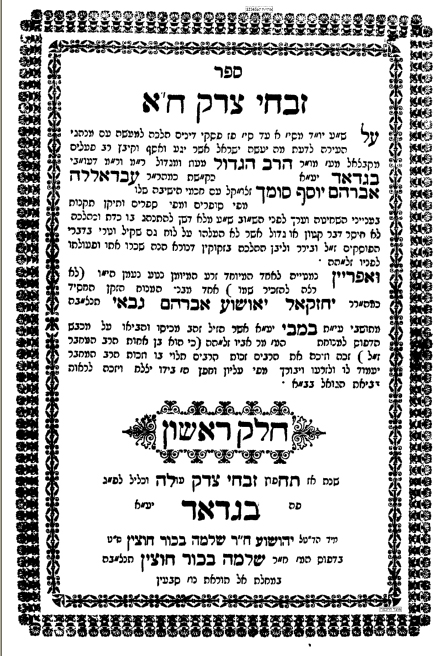 In 3620, Shimon the Chashmonai was appointed Kohen Gadol and governor of the Jews, marking the beginning of the dynasty of the Chashmonaim.

Harav Ovadia Somech was born in Baghdad, Iraq, in 5573/1813. He was known as Abdallah, the translation of Eved Keil, servant of Hashem. Abdallah was the eldest of eight brothers and eight sisters, who were known for their gemilus chassadim.

At a young age, he studied under Harav Yaakov Harofeh, zt”l, a leading Dayan in Baghdad and mechaber of many sefarim, whom Harav Abdallah considered Rabo muvhak.

He married his cousin, the daughter of his uncle, Harav Yitzchak Yosef Somech, who was a well-to-do man; this enabled him to dedicate himself solely to Torah learning.

Harav Abdallah’s first venture was establishing a yeshivah in his native Baghdad. Most of the Torah leaders of that generation were talmidim of Harav Abdallah; most prominent among them was the Ben Ish Chai, zt”l, who took the position of Harav Abdallah as Rosh Hagolah when he was niftar.

At the end of 5649/1889, a cholera epidemic broke out in Iraq. Harav Abdallah himself contracted a serious case of cholera and many people all over Baghdad davened for his recovery. Harav Abdallah was niftar on Shabbos night, the 18 Elul, 5649/1889.

Because Harav Abdallah had contracted the disease, the governor did not allow the Jews to bury him in the cemetery where his forebears were buried, on the eastern side of the Chidekel River. Eventually, permission was given for them to bury Harav Abdallah near the kever of Yehoshua ben Yehotzadak Kohen Gadol, on the western side of Baghdad, known as El-Karach.

When the chevra kadisha members came to dig up the site on Motzoei Shabbos, the local governor came and would not let them continue digging, throwing them out of the cemetery.

In the riot that followed, a few courageous Jews jumped over the fence, breaking open the gate from the inside, bringing in the mittah of Harav Abdallah, and burying him quickly.

In Kislev, the Sultan ordered the body of Harav Abdallah be taken out of the grave and transferred to the cemetery near Baghdad, where his other family members were buried.

Harav Abdallah wrote Zivchei Tzedek, which consists of his psakim in Yoreh Deah, Etz Hasadeh on maseches Beitzah and other masechtos, and other sefarim.

In 1862, the Bureau of Engraving and Printing began operations at the United States Treasury.

In 1883, seismic sea waves, created by the eruption of the Krakatoa volcano in the South Pacific, created a rise in the English Channel 32 hours later.

In 1910, Korean Emperor Sunjong abdicated, as the Japan-Korea Annexation Treaty went into effect.

In 1957, the Senate gave final congressional approval to a Civil Rights Act after South Carolina Sen. Strom Thurmond (then a Democrat) ended a filibuster that had lasted 24 hours.

In 1965, Gemini 5, carrying astronauts Gordon Cooper and Charles “Pete” Conrad, splashed down in the Atlantic Ocean after a record-breaking eight days in space.