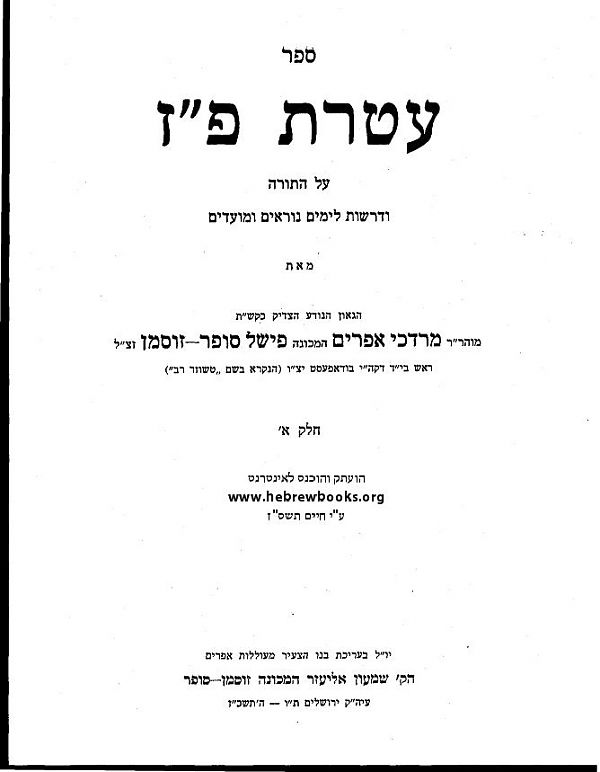 Rav Yaakov Koppel learned first from his father; later, he attended the esteemed Pressburg Yeshivah, where he learned under the Ksav Sofer. He also learned in Grosswardein, in the yeshivah of Harav Yitzchak Aharon Landsberg.

Rav Yaakov Koppel married the daughter of Harav Yisrael Shveir, who was Rav in Sobotitch. When his father-in-law was niftar in 5620/1860, he succeeded him as Rav. In 5632/1872, he was appointed Rav in Verboi, his native city; and then, in 5650/1890, he became Rav of the frum community in Budapest, Hungary’s capital, home to a large and prestigious Jewish kehillah.

Rav Yaakov Koppel was known as a great lamdan and as an inspiring, riveting speaker. He was respected by all, including the gentiles. In fact, the Hungarian government bestowed on him the official title of “adviser to the government.”

Rav Yaakov Koppel founded many batei medrash in Budapest, dealt with a wide array of communal problems and fought for the sanctity of Hashem’s name.

Rav Yaakov Koppel merited longevity, which was quite rare in those days. He passed away at the age of 91 and was buried in Budapest.

Unfortunately, none of the chiddushei Torah of Rav Yaakov Koppel were published, aside from some small items in his son-in-law’s sefer, Ateres Paz.

His son-in-law was Harav Mordechai Efraim Sofer-Zusman, who served as Dayan under his shver. After Rav Yaakov Koppel’s petirah, he unofficially succeeded him as Rav of Budapest.

In 1519, Portuguese explorer Ferdinand Magellan and his crew set out from Spain on five ships to find a western passage to the Spice Islands. (Magellan was killed en route, but one of his ships eventually circled the world.)

In 1870, Italian troops took control of the Papal States, leading to the unification of Italy.

In 2000, Independent Counsel Robert Ray announced the end of the Whitewater investigation, saying there was insufficient evidence to warrant charges against President Bill Clinton and first lady Hillary Clinton.