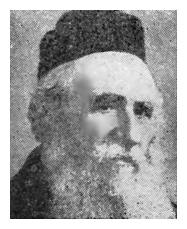 In 2449, the egel (golden calf) was formed by the eruv rav. Assuming that Moshe Rabbeinu would not return, they turned to Chur, the son of Kalev and Miriam, and asked him to make an idol. When he did not agree, he was killed. Aharon Hakohen, realizing that he would share a similar fate, attempted to delay them, albeit in vain.

2449, Chur, son of Kalev ben Yefuneh and Miriam Hanevia, who was killed by the erev rav for his protest against making the egel.

Rav Aharon Yosef was born in Ivye. As a bachur, he studied in Volozhin and Slabodka. While in Volozhin, he caught the eye of Harav Yitzchak (Itzele) Peterburger, zt”l, a disciple of Harav Yisrael Salanter, zt”l, founder of the mussar movement. He introduced Rav Aharon to the derech hamussar. Eventually he moved to Kelm, where he became attached to Harav Simcha Zissel Ziv, zt”l, the Alter of Kelm. He eventually married Sarah Rivkah Levin from the town of Shavel, in Lithuania.

Harav Aharon served as the Rav in Lomza and in no less than 13 cities, including Baisagola, Semiatitz, Tzaritzin, Poltova and Saduva, where he established a yeshivah. He later served as Rav in Lomza and Suwalk. In 5690/1930 he became Rav of Shavel. Even under the Soviets ( 5700/1940- 5701/1941) he continued teaching Torah, with many participants attending his drashos.

During the Holocaust, he and his son-in-law, Harav Isaac Rabinowitz of Telshe, were among the first to be murdered when the Germans entered Shavel. He was, unfortunately, the last Rav in Shavel.

In 1767, Britain approved the Townshend Revenue Act, which imposed import duties on glass, paint, oil, lead, paper and tea shipped to the American colonies. (Colonists bitterly protested, prompting Parliament to repeal the duties — except for tea.)

In 1880, France annexed Tahiti, which became a French colony on December 30.

In 1946, British authorities arrested more than 2,700 Jews in Palestine in an attempt to end alleged terrorism.

In 1995, the space shuttle Atlantis and the Russian Mir space station linked in orbit, beginning a historic five-day voyage as a single ship.