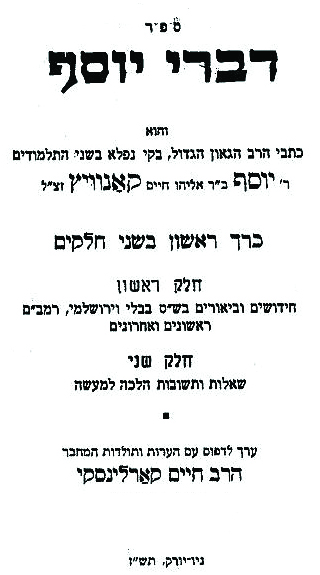 In 5476/1716, the first substantial Jewish settlement in Massachusetts was established.

Harav Yosef was the son of Harav Eliyahu Chaim Kanowitz, zt”l, and the son-in-law of Harav Yaakov Dovid Wilovsky, zt”l, the Ridbaz.

When the Ridbaz was forced to leave Slutsk, the kehillah wanted to appoint Rav Yosef as their Rav. However, when they came to his house to give him the ksav Rabbanus, his wife, daughter of the Ridbaz, adamantly refused to let him accept it, and he fled from the city. A few weeks later, it became clear that her reason was that serving as a Rav in a large city would disturb him from his learning. He was later appointed Rav in the small town of Shadawa.

After a few years, Rav Yosef moved to Eretz Yisrael, settling in Tzfas, where he served as Dayan and as Maggid Shiur in the yeshivah of his father-in-law.

Later Rav Yosef moved to America, where he was actively involved in the field of kashrus. Harav Chaim Ozer Grodzensky, zt”l, wrote him a letter regarding the use of gelatin, which was printed in his sefer.

Rav Yosef was niftar on 16 Sivan, 5704/1944, in America, and laid to rest there. He was reburied in Eretz Yisrael in 5706/1946. It is related that upon opening his aron in Eretz Yisrael, the chevrah kaddisha were astounded to see that his body was still whole, as on the day he was buried.

A compilation of Rav Yosef’s teshuvos were published as She’eilos u’Teshuvos Zichron Yosef.

In 1943, during World War II, American troops secured the Aleutian island of Attu from Japanese forces.

In 1971, the American space probe Mariner 9 blasted off from Cape Kennedy on a journey to Mars.