This Day In History 16 Elul/September 19 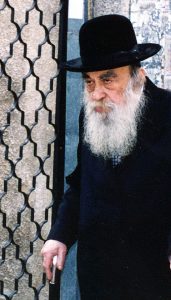 Harav Avraham was born 11 Shevat 5677/1917 in Kinov, in the Ostrovtze region of Poland. His father was Harav Yaakov Yitzchak Dan, Hy”d, son of Harav Elimelech Menachem Mendel of Strikov, zt”l. Reb Avraham, as he was called, was a child prodigy who studied under some of the greatest Polish talmidei chachamim.

Following his bar mitzvah, he entered Yeshivas Chachmei Lublin and became one of the prime students of Harav Meir Shapiro, the Kaziglover Rav and Harav Shimon of Zelichov. There he grew in stature in Torah, avodah and middos.

In Kislev 5700/1940, obeying his father’s orders, Reb Avraham fled Warsaw for Vilna. Of his whole family, only he and a sister survived the war; their parents and eight siblings perished, Hy”d. He eventually arrived in Eretz Yisrael and settled in Yerushalayim. He used to say that everything written in Eichah about the slaughter and suffering of Yidden happened in World War II.

After his marriage to the daughter of Harav Meir Wydislavski, he found an apartment near that of the Tchebiner Rav, with whom he was also close.

It took many years for Reb Avraham to be able to undertake the rebuilding of Strikover Chassidus. When the time came, he moved to Tel Aviv and built a beis medrash, but did not establish a court. Instead, he founded an elite kollel.

In 5744/1984 he moved to Bnei Brak, where he re-established his beis medrash and founded Yeshivas Strikov.

The Strikover Rebbe’s humility was extraordinary; he could not bear any kavod. He never had a meshamesh — he opened his front door himself and answered his own telephone. For most of his life, he wore a regular suit instead of the usual rabbinical garb (kapota) so as not to stand out.

When he moved to Bnei Brak, he would often be seen helping children cross the street, and would even cross back several times if he noticed more children who needed help.

In 1777, the first Battle of Saratoga was fought during the Revolutionary War.

In 1796, President George Washington’s farewell address was published. In it, America’s first chief executive advised, “Observe good faith and justice toward all nations. Cultivate peace and harmony with all.”

In 1982, the smiley emoticon was invented by Carnegie Mellon University professor Scott E. Fahlman, who suggested punctuating humorously intended computer messages with a colon followed by a hyphen and a parenthesis as a horizontal “smiley face:” 🙂

In 1995, the U.S. House of Representatives voted to drop the national speed limit. This allowed the states to decide their own speed limits.