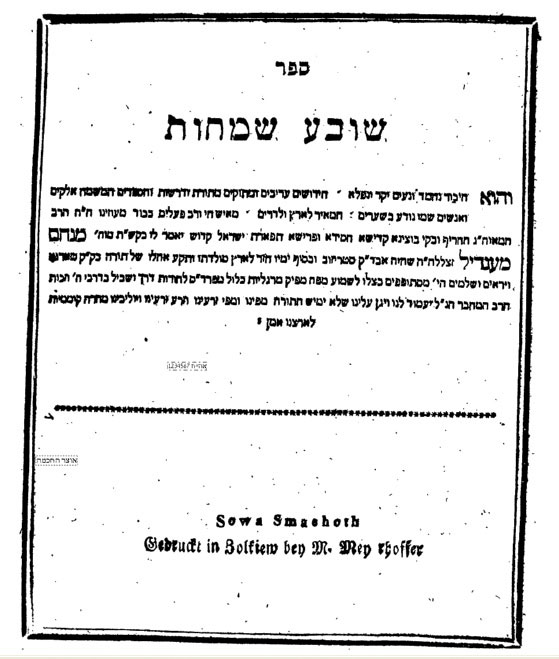 In 5706/1946, the British government ordered the removal of all “illegal immigrants” in Eretz Yisrael to Cyprus.

Harav Menachem Mendel was born in 5548/1788 in Tarnow. His father was Harav Moshe Avraham Dovid. As a child he excelled in Torah, outshining the other children his age. Aside from his great geonus, he served Hashem with a unique inner fire, and was a mushlam in Torah and avodas Hashem.

His Rebbe was Harav Menachem Mendel of Rimanov, who cherished him. He also traveled to, zy”a, the Kozhnitzer Maggid and the Chozeh of Lublin.

Reb Mendel of Strizov was the baal Mussaf in the Rimanover court, famous for his fiery, hislahavusdige davening as well as for being a great tzaddik. He had the privilege to help the Yamim Nora’im tefillos of the holy Rimanover Rebbe reach the highest celestial spheres.

One Yom Kippur, the Rimanover Rebbe suddenly banged his machzor shut in the middle of Mussaf. After davening, the Rebbe explained to the perplexed Chassidim that Reb Mendel was trying to have the kavanos of the Kohen Gadol on Yom Kippur, and because he was so young the Rebbe feared that it would harm him!

Reb Menachem Mendel served as Rav in Strizov for a while, where he wrote many responsa in Halachah — especially on the topic of agunos. After serving as Rav in Strizov he returned to Tarnow, the city of his birth, where he led an elite group of Chassidim to higher aspirations in avodas Hashem. Unfortunately, he was niftar at the young age of 43.

This is how his passing came about: During his last year, 5591/1831, a terrible plague erupted in his town and many Yidden tragically succumbed. It was only after Reb Mendel offered himself as a kapparah that the dying stopped…

Sova Semachos al HaTorah, a collection of divrei Torah thathe told his talmidim on Shabbosos and Yamim Tovim, was revered by all as a holy sefer. It was reprinted with a lengthy foreword in 5759/1999. Another of Reb Mendel’s sefarim is Sova Semachos al Maseches Kiddushin.

In 1813, Austria declared war on France.

In 1867, President Andrew Johnson sparked a move to impeach him as he defied Congress by suspending Secretary of War Edwin M. Stanton.

In 1898, fighting in the Spanish-American War came to an end.

In 1914, Britain and France declared war on Austria-Hungary.

In 1944, during World War II, Joseph P. Kennedy Jr., eldest son of Joseph and Rose Fitzgerald Kennedy, was killed with his co-pilot when their explosives-laden Navy plane blew up over England.

In 1960, the first balloon communications satellite — the Echo 1 — was launched by the United States from Cape Canaveral.

In 1962, one day after launching Andrian Nikolayev into orbit, the Soviet Union also sent up cosmonaut Pavel Popovich; both men landed safely August 15.

In 2003, Liberia’s leading rebel movement agreed to lift its siege of the capital and vital port, allowing food to flow to hundreds of thousands of hungry people.