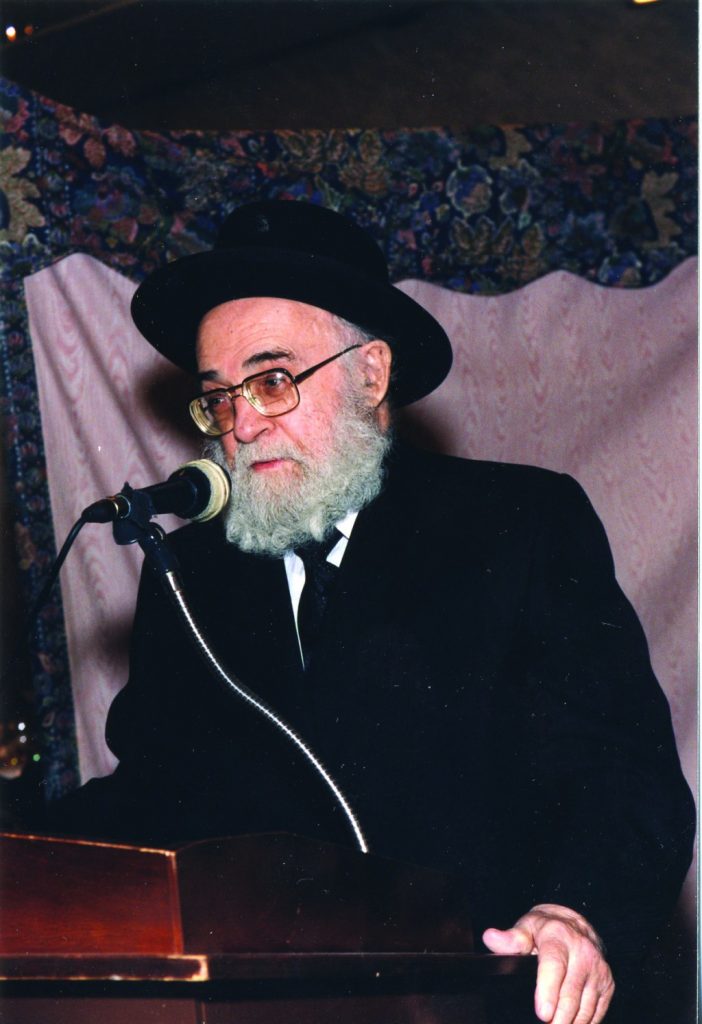 Harav Tuvia Goldstein was born in 5677/1917 in the Polish town of Vlodova. His father, Reb Chaim Meir, z”l, was the town’s shochet. When Reb Tuvia was only two years old, both his parents succumbed to typhoid. The young orphan was raised by his grandfather, the Rav of Vlodova, and his older sister.

In the early 1930s, he was admitted to Yeshivah Ohel Torah of Baranovitch, headed by Harav Elchanan Wasserman, zt”l. From Baranovitch, he went to learn in Yeshivas Kamenitz under Harav Baruch Ber Leibowitz, zt”l. He was in Kamenitz when World War II broke out, forcing him and his peers to flee.

Eventually Reb Tuvia, together with several other bachurim, found themselves in Russia, where they were sent to perform forced labor in Siberia. Reb Tuvia later related how the bachurim would help each other and how they would sit and think of innovative ways to work without transgressing Shabbos.

After the war, Reb Tuvia returned to his hometown, where he found that of his entire extended family, only one aunt had survived.

Reb Tuvia left Poland and made his way to Paris, where he met his Rebbetzin, who had spent the war in the Slabodka ghetto. Harav Mordechai Pogromansky, zt”l, enthusiastically advised her to marry Reb Tuvia.

The Goldsteins immigrated to the United States and settled on the Lower East Side of Manhattan. Reb Tuvia joined the staff of Yeshivah Rabbeinu Yaakov Yosef (RJJ) and also served as a Dayan on the beis din of Harav Yosef Eliyahu Henkin, zt”l.

Reb Moshe and Reb Tuvia could be found discussing halachic matters at all hours of the day and night.

Reb Tuvia was so attuned to Reb Moshe’s way of thinking that he was able to tell whether what was said or written in Reb Moshe’s name was genuine or fabricated.

Reb Tuvia was particular about not wasting time. He had a strong sense of responsibility to the tzibbur, always making himself available for she’eilos. His humility was legendary.

A prominent posek of his time, Rav Goldstein established Yeshivas Emek Halachah, where yungeleit would focus on learning halachah l’maaseh. Under his guidance, they would be trained to serve as poskim, according to his particular derech of psak halachah. Rav Goldstein led the yeshivah for around 30 years.

Over the last few months of his life, Reb Tuvia’s health deteriorated. On Friday night, 15 Iyar, Reb Tuvia’s pure neshamah rose to the Heavenly spheres accompanied by the thousands of blatt Gemara, piskei halachah, maasei chessed and mitzvos that characterized his life. He was buried on Har Hamenuchos in chelkas haRabbanim.

In 1647, Peter Stuyvesant arrived in New Amsterdam to become governor of New Netherland.

In 1947, the B.F. Goodrich Company of Akron, Ohio, announced the development of a tubeless tire.

In 1987, doctors at Johns Hopkins Hospital in Baltimore transplanted the heart and lungs of an auto accident victim into a cystic fibrosis patient who gave up his own healthy heart to another recipient. (Clinton House, the nation’s first living heart donor, died 14 months later.)