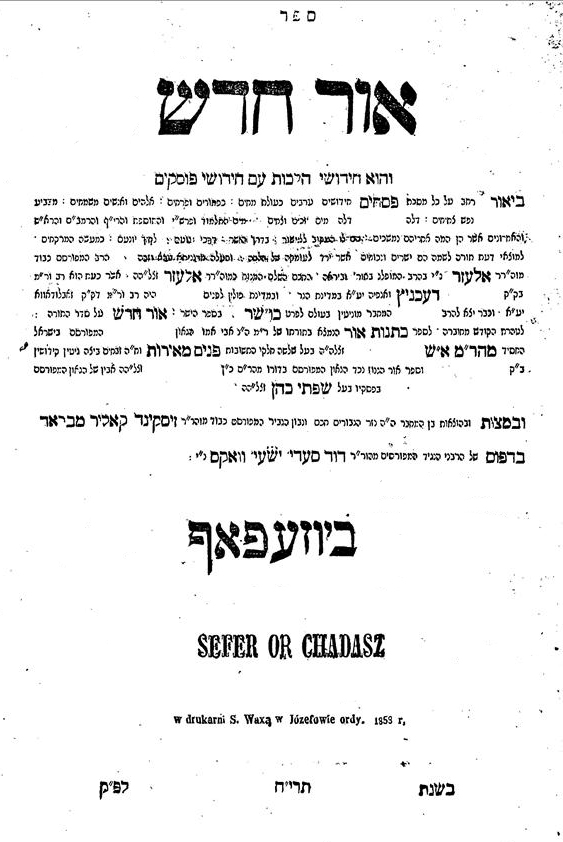 In 2979/783 B.C.E., Yeravam ben Nevat ascended to Beis Kel in a pilgrimage that he invented, a month after Sukkos. Ido Hanavi warned that his altar will become destroyed, and so it was.

In 5699/1938, Kristallnacht pogroms in Nazi Germany devastated shuls and Jewish property. About 30,000 Jews were arrested, 290 shuls were burned, and 7,500 Jewish shops were vandalized.

5597/1836, Harav Leib Baal Hayisurim, zt”l, at whose burial place in Tzfas people daven for yeshuos, as per his havtachah

Harav Elazar Kalir was born in 5501/1741, in Rechnitz. He was born after the passing of his father, and was named Elazar after him. The orphan was brought up in the home of his maternal grandfather, Harav Meir Eisenstadt, the Panim Meiros.

As a young bachur, he was already fluent in the entire Shas.

He was appointed to serve as Rav in Zablodawa, where, in 5526/1766, he published his drashos together with the sefer Kosnos Ohr, from his grandfather. This sefer impressed all those who learned it with the sharpness and clarity of its young mechaber.

At age 27, Reb Elazar was appointed Rav in his home town, Rechnitz. He founded a yeshivah there, where he taught many talmidim, a number of whom became Gedolei Yisrael. Harav Betzalel Ranshbourg is one of the more famous ones.

His fame as a leading posek and Rav spread while he was in Rechnitz, and many of the generation’s leading Rabbanim addressed their she’eilos to him. This was the basis of his Sheilos U’teshuvos Cheker Halachah, which was published after his petirah by his son Harav Aleksander Ziskind.

Later, Reb Elazar was invited by three leading kehillos to serve as their Rav: Vizhnitz, Boskowitz and Kellen. He chose to settle in Kellen.

His other sefarim include Ohr Chadash, on Maseches Pesachim; Chavos Yair, a collection of drashos; and other chiddushim on many masechtos that were never printed.

In 1776, British troops captured Fort Washington in New York during the American Revolution.

In 1933, the United States and the Soviet Union established diplomatic relations.

In 1993, President Bill Clinton signed the Religious Freedom Restoration Act, making it harder for government to interfere with religious practices.